For the first time for the SMB, Google is providing human interaction in the form of the Tag and Boost teams. Google, to their credit, recognized the need for both outbound calling and some level of support in the SMB market place.

But in an effort to cram every business and every problem into the same scalable system, a not small number of businesses are getting very upset. Unlike most businesses that put in place processes with a goal to satisfy every customer, Google has always taken the perspective that if you scale worldwide there will always be some statistically acceptable low level of failure in every process including customer service. Their business processes and algo’s do not seem flexible enough to ever achieve “customer delight” in say the manner of an Apple.

Here are two recent examples that demonstrate the problems that Google is facing on the customer service front. The first being predicated on quirks in their algo and the second on a lack of flexibility and clarity in their promotional efforts.

The Bayfront Westcott House Bed and Breakfast, has had a Tag promoting his bed and breakfast in St. Augustine Fl. Unfortunately, his listing has merged with that of the B&B right next door. Given how Google’s algo works and some bad luck on the phone number choice when he bought his business, it is understandable from a technical sense. It is not understandable in the very real sense of him running his business. He and I called Tags #800 a number of weeks ago and were told that the problem was being elevated. Weeks may be moments to Google but they are years to the typical SMB.

He sent me this email, dripping with more than a little sarcasm, this morning in response to a Christmas card from Google:

I’m glad someone gets millions out of google!!! 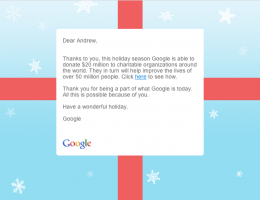 Thanks to you, this holiday season Google is able to donate $20 million to charitable organizations around the world. They in turn will help improve the lives of over 50 million people. Click here to see how.

Thank you for being a part of what Google is today. All this is possible because of you.

Have a wonderful holiday.

In the second instance, several SMB with multiple locations misunderstood the fine print of “Your free trial comes with no strings attached”. In a post titled Very unhappy with the transparency of the Tags free trial two businesses describe their confusion and lack of appropriate response.

This whole tag trial has been a nightmare for us.

Google sales rep incorrectly set us up for 3 locations (she called to introduce the offer & walked us through it over the phone), never saying the trial was for only one. She even tried to get us to ‘do a trial on all locations’! Good thing we didn’t or things would be worse. Google customer service won’t fix. Our trial started 10/26; we canceled it on 11/26, and got a bill for the entire month of November. I’ve called the rep Rachel 4 times at 800-838-7969 and she won’t return calls. Still waiting to speak w/Chris Cybuch, her supervisor.

The Google Places Team or local-help@google.com gave me this most recent response: “While I understand you do not think the charges were legitimate, I’d strongly urge you to check the Billing Tab of your Google Places account which shows you the period your tag was active – thus accruing legitimate costs. Although I am happy to assist you , I am unable to provide any different resolution, as our processes are standard for all advertisers. I’d like to reiterate that we will not be able to offer a refund or a credit.”

In one case, a paying customer is caught up in the messiness of “THE ALGO” chasing his tail and the other caught in the maws of less than clear self service. Nobody expects perfection in the real world. But SMBs, from their own exprience, expect a willingness and expediency in solving problems.

In both cases, their expectation of assistance went unrewarded. In both cases, there should have been discretion and the ability for staff to intervene quickly and efficiently. Apparently, there isn’t and instead of fixing the problems quickly, Google too is left chasing its tail, wasting time and money on answering the phones but not providing service.

To paraphrase Shakespeare; Hell hath no fury like an SMB scorned.

But, yes, it’s actually Google. But they don’t really want to help you with your ranking. They want to sell you Boost. This is the same business model as the other directories which offer you a free listing and then upsell you to a premium version for a fee.