Do you remember the old SNL skit “Point/Counterpoint” (named after the 60 Minutes Segment) which featured Dan Akroyd making scurrilous attacks on Jane Curtain?  Not sure who is whom in this current remake starring Google and Tripadvisor but it sure is taking on the same tenor. 🙂

The recent “its a technical issue, no its intentional” discussion between TripAdvisor and Google has taken one more turn with TripAdvisor reviews once again showing up in Google Places. Many of the businesses that initially reported disappearing TripAdvisor reviews (here, here ) are now showing those reviews again.

Su at the Inn at Tanglewood Hall in York Harbor, ME. sent me an email today that hers and other TA reviews in Kennebunkport had returned. And upon checking, those reported missing in the forums had also returned. 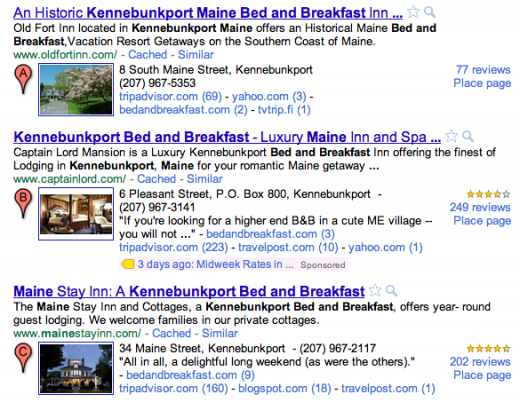 Now if I could just get Google to find the 25 or so missing from my Places account, the heavens would be in alignment.

Still seems to be piecemeal, Mike. As of this morning I did my usual check for “London Hotels” on Google and there are TA reviews for only 2 out of the top 10.

Our hotel Places listing is now counting TripAdvisor reviews again, but it is still not showing them. We had 540 total reviews for a awhile, with several international TripAdvisor sites other than .com reviews. When TA reviews went away, our total review count went down to 249. Our Places page is now showing 483 reviews, which could account for the TA.com reviews but appears to still be missing about 60 reviews them. The missing 60 could be the usual fluke or the international TA reviews, but I am more interested in seeing that my total reviews are back up. Do you know anyone else seeing the quantity of TA reviews back in their Places pages?

Could this be a work-around for Google to count the TA reviews for rankings even if TA will not allow for Places to show the review content?

In the example I gave above, bed and breakfast kennebunkport shows TA reviews both in the count and in the places pages.

The example by Phil for the UK still shows a dirth of TA reviews….

TripAdvisor Reviews Are NOT Back! | TripAdvisorWatch: Travel Review Sites in Focus
December 14, 2010 at 7:33 am

[…] wrote yesterday that TripAdvisor reviews had re-appeared in Google Places, following on from a similar post by Mike […]

[…] the weekend, we reported that TripAdvisor reviews, while not showing up in UK, were returning to US listings. Apparently, it […]