In early July, I reported (via Linda Buqeut of Catalyst eMarketing ) that Google was testing New, More Integrated Local Search SERPs. These tests are apparently on-going, having shown up in Philadelphia and recently in NYC. Starting this past Thursday, the new results showed up for me in a number of upstate NY markets for hotel and bed & breakfast searches. The new results are showing only on Safari for the Mac but not on Firefox, IE or Chrome. I have performed a number of hotel searches in a range of markets and am making before and after (pdf) screen captures available at the end of the post.

I have done a detailed comparison of the before and after listings on one search result (Hotels Rochester NY). Here is the test ranking display with the local and organic rank of the current display noted to the left of the new rank (click to view larger):

Contrary to some reports, Google is not replacing organic results with local results. Rather they are merging the Local and Organic results and showing the exact same number of total listings on the page. Some local listings though that previously had 2 listings, one local and one organic, now get only 1 consolidated and enhanced listing and only one link to their site.

If the listing currently has a higher local result than its organic listing, the listing typically moved up in the overall ranking of the new display. If the listing had no local presence in the current display, then it moved down the page. If the Local listing was strong but the website had very low organic visibility then the listing would move down in rankings slightly. Thus the local listings that performed best were those with both good local ranking AND good organic rankings.

The directory sites, while remaining visible, moved down the page. The Expedia, TripAdvisor and HotelGuides main listings all dropped. It needs to be noted though that TripAdvisor gained 7 additional review links and Priceline received 4 additional links in the highly visible combo results as a review source. So while pure directory sites will be hurt, those providing significant review content to Google could gain immeasurable exposure and a number of prominent links.

Interestingly, the page of the new results itself is physically longer. While the exact same businesses/websites appear on both the before and after page, only 5 of the consolidated listings showed above the fold in the new display. In the current display there are seven local + usually two organic listings showing.  Obviously the local listings with both an organic and local presence were consolidated into a single listing.

I would point out, that there are some queries with the new search results display where three organic listings are showing above the local listings: 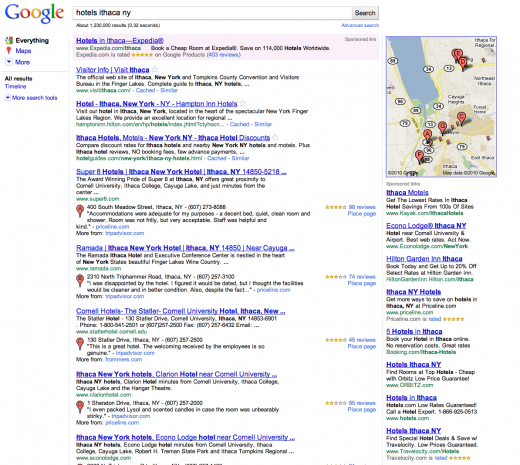 Here are several “before” and “after” pdf files of the results for you to analyze and draw your own conclusions. I have attempted to capture a range of the new result display layouts:

Thanks for the expanded look and analysis. Merging the local and organic results ….how interesting. There is a discussion on this at Cre8asite forums : http://www.cre8asiteforums.com/forums/index.php?showtopic=78415&hl= that I’ll have to update with your findings.

This experiment suggests you need to optimize everything/ maps.google.com and google.com

Not seeing this in the DC region. Did note that a search for Washington DC hair stylists turned up TWO smbs with tags. Which will be interesting….what happens when lots of businesses in the 7 pac have a tag??? (appropriate for a different thread-> “shrugs” )

Interesting findings. Here in Australia, we had a company called True Local who dominated these placement spots for years until Google places came in and completely bumped them off the top positions. Our business used to hold high positions in True local for the search term Melbourne Venues, but now has no impact in the Google local search?

Thanks once again, Mike….great expose of same…and I’m digging thru c.ca to see if there’s any parallels as yet…

I still have not seen these results in the wild… damn Israeli IP, I’m always the last to see these changes.

Mind if I use your screenshots with a link?

We have been seeing this view in the Boston area for “Boston hotels” and “Provincetown hotels”, but it comes and goes randomly. Your comment about “Obviously the local listings with both an organic and local presence were consolidated into a single listing” will help those listings that were at positions 7-10, but it will hurt those that have both organic and 7 pack listings. Do you know which one will be favored? The organic listing or the local one? Which one will be clicked on more? Now that would be an interesting study.

I can’t wait for this to come to Europe! It’ll be great a business like mine that does well naturally and locally, and there’s some search terms that I rank well organically but not locally and vice versa which should balance out well.

Just noticed that the sponsored link at the top of the results is not shaded in purple as usual, making it almost appear as though it is organic. It doesn’t appear this way in the other examples that you posted. Any theories on this?

Thanks Mike 🙂
This is all very, very interesting and helpful. I really appreciate the screenshots as they clearly demonstrate what’s going on. Your data on ‘how’ the blending of the Local and Organic rankings fare is quite telling. This hybrid makes sense to me, and I suspect G will start some form of wider implementation soon. This appears to be good for Local SEO/Organic SEO, and not so good for a lot of the city/niche/ type directories.

The results are erractically still showing for me but only in Safari….Mostly for WNY searches like Buffalo or Rochester and I am seeing for searches like “spa rochester ny”, “plastic surgery buffalo ny” and “pizza buffalo ny”. Sometimes I can see them out of my region – like Milwaukee Florist, other times not.

@Lauren- I have no idea the outcome of this arrangement or if it will become standard fare.

@Menachem
You are always welcome to screen shots with attribution. Thanks for asking.

@EarlPearl
See the next post to observe the results with TAGS

@Jim
They will likely show up at some point…you just need to be on the right browser, searching the right industry, at the right time, with the right ISP…

[…] If you’re just joining the conversation now, here’s what the new layout looks like (Thanks for the screenshots Mike): New SERPs […]

Hi Mike,
My initial impression of your screenshot is that the results look a little crowded…the site URL, place page, tripadvisor snippets, etc. On the one hand, I kind of like how much info there is, but it does strike me as cluttered, maybe because I’m just not used to seeing SERPs look like this.

I’d like to ask the million dollar question, though: what do YOU think of this? In your mind, would this represent an improvement for users/business owners, a step backwards, something else? I know you like to report all this fascinating news with the measured voice of reason, but I wouldn’t mind some editorial opinion on this subject from you.

@Miriam
Ok…stop back tomorrow for the 50 cent answer to the million dollar question…I am not one to be constrained by a comment box when I can write 750 words…. remember you asked for it. 🙂

Disastrous for the business who previously had a high ranking organic result with a meta description of their own choosing who now shows the snip from an unhappy tripadvisor customer. The one who has a four star rating and 122 reviews, but Google has chosen the review that says “so many things went wrong on my stay”

[…] that there may be a natural limit to how many cash cows can fit in one company, or at least on one SERP. And much of the growth these behemoths do find comes from, wait for it…international […]

[…] URL). Take the exact URL and use it in your Places Dashboard. Your listing will take on the relative strength of the organically successful page showing the Title Tags, Description and URL from the poached […]