Google Maps: Citation Conflation or Where have my Citations Gone?

Mathew Hunt of Small Business Online Coach, recently pointed out what appears to be a new bug in Google’s clustering algo that causes one business’s citations to show up on another business’s Places Page.

It appears that Google Maps, when scraping multiple citations for different businesses that appear on a single unstructured web page, not only conflates the citations for that specific page but brings along other citations not from that page, from one business to another. In my case a number of citations from one of my clients transferred to another client. They are not in the same industry, nor the same part of the country. The only thing they had in common was that both have citations on my client list. 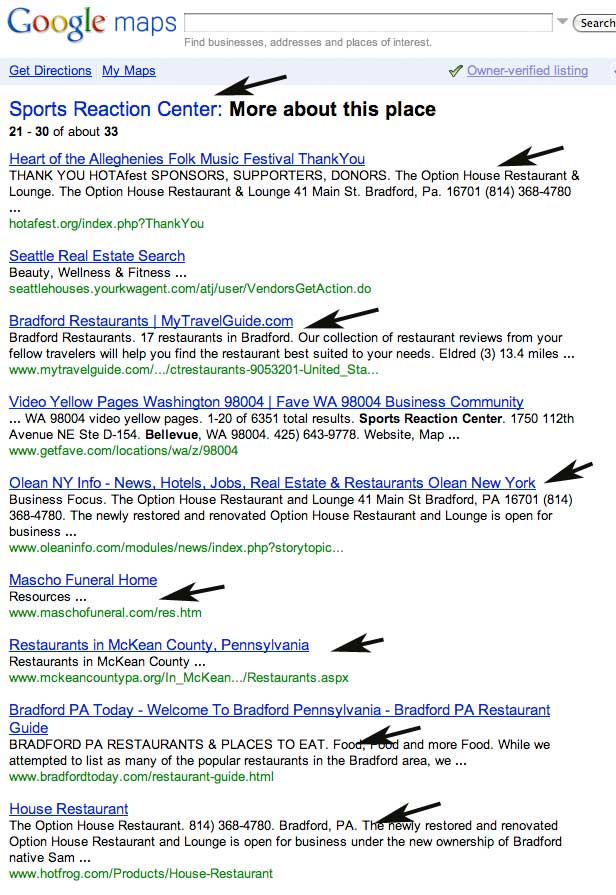 The problem showed up only after I added the Sports Reaction Center to a list of clients that I maintain. That list, which has often shown as citations for individual clients on their Places Page, is not highly structured and initially the two listings where adjacent to each other. Historically citations from the list passed to local clients with no problems. Here is a screenshot from the Google cached page scraped on Feb 4th that seems to have precipitated the problem:

I have changed the page by adding separators and moving the two listings apart to see if clusters will return to a normal state. It appears, given that the problem is being reported in the forums, that it is a bug caused by the mechanism that assigns citations to each business’s cluster. In my case, and I am sure in others, it is not a competitor’s skullduggery. It seems likely to occur to businesses in the same local market that are listed adjacent to each other on a web page that Google does not parse correctly and will, like listing mergings, cause hard feelings amongst close competitors.

Hopefully it is one that Google will address quickly as it will play havoc with the quality of the Places Pages and potentially with ranking.

Very interesting. It does look like it might be related to Google’s approach to segmentation based upon visual gaps. More whitespace and the horizontal rules elements may help.

That was my theory and the reason for the change to the page that I implemented. We will see if it squares away the problem for me…although most people will not have access to the page that causes the problem…it is also curious to me that it was just the one citation on that page but it brought along 6 or 8 others…there must be some tree structure that associates citations with each other.

It is a little surprising that one page could have that much of an impact. I’d imagine that there are a number of other mentions/citations to those businesses elsewhere.

I’ll be following along to see if your change makes a difference.

Mike, I noticed too that some of my clients citations that were being pulled to other business’s G-Maps Listings what had in common was they were on the same page from some sources (not all), so it would make sense when you say:

“It appears that Google Maps, when scraping multiple citations for different businesses that appear on a single unstructured web page, not only conflates the citations for that specific page but brings along other citations not from that page, from one business to another.”

Mike Ramsey actually first pointed this out to me, when I asked for help on Twitter.

I never connected the dots so clearly, but I’m going to look at it more now.

Great eye and investigative work! -> This is why your the Google Maps Kink! 🙂

BTW, glad to hear it’s not just my some of clients experiencing this, I hope G-Maps addresses this before it affects any rankings!

You are a man of mystery and many names. On the citations that Matthew was pointing out, I noticed that it was due to the phone number of one company being listed on the same page as the Name of another business.

The white space theory is really interesting. I have seen a lot of these lately and have a bit of my personal listing for nifty marketing showing up in some other lucky companies places page. The way I have been finding this is looking at what google is highlighting on the citations tab. which was in Mathew’s case, the following…

So, I then did a search for
“company business name” + “wrong number”

I was surprised at how many listings were coming up where the two were on the same page. Maybe the quantity of times listed together helped Google to erroneously match the citations.

The quantity theory is interesting but if it is more than one it is not that many.

In my case these two businesses are only listed together by me (no where else on the internet) on that page but…. I have some old duplicate content of the page so that it shows up in fact 4 times to Google…so we can’t tell if it is once or 4 as the minimum number but it is no more than that…

But that still only explains the one bad citation….we still do not know why or how the other citations are then carried along. In my case they are only together at my customer listing page(s). So it is unclear how citations like the Mascho Funeral Home make their way over….they are somehow related through my site.

Would love to hear from a Googler on this one!

Mike,
May I ask for a definition of unstructured vs. structured?

Structured as in providing meta data on the web page that clearly indicates to Google what is a name, address & city as with microformats like hCard or RDF. Unstructured being just plain HTML so that google’s algo has to guess where one citation stops and another starts by looking at the content.

Actually I think you caused the client issues and not google. “The only thing they had in common was that both have citations on my client list.” — that right there should tell you the problem is you and the way you do business for clients. As a marketer, each client needs to be treated as its own entity, and not as a part of your entity. — I had to stop posting SEO ranking reports online, because my reports would outrank my clients websites……

I would agree that I “caused” the problem but I did not cause the problem for the
many businesses that this has happened to. It also doesn’t explain why all the other citations that I have no control over moved over as well.

Our business listing lost citations but isn’t appearing on another listing, they are just gone in all. What happened? Thanks