Are the SEO Oneboxes Returning to the Google SERPS? Nah…..except in Duluth

Marty of Aimclear sent this screen shot of what, at first glance, appeared to be a spammy onebox for the Google search SEO Duluth and perhaps foreshadowed the return of SEO to the 7 Pack after their banishment: 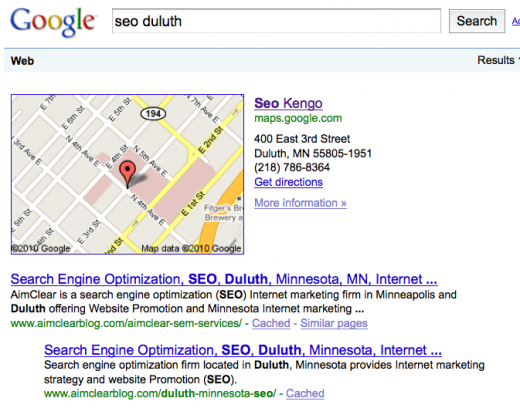 Neither is the case. Apparently there is a Physicians Assistant in Duluth by the name of Kengo Seo. As is often the case with Medical Practioners the listing sites that Google referenced had the last name first and it was added to the index that way.

Now if the good Dr. Seo would name his first child, Aimclear, Marty would be sitting golden.

Haha, on the one hand, this is TOO funny.

I also wonder, though, if this means that businesses who are actually SEO companies should remove that category and simply include it in their business titles?

@david A very well known search engine is watching Mike’s blog like a hawk! now it will never work. 🙁

There is nothing like empiricism to answer the question. I think you should go for “Nifty SEO” with a category of potato vendor and see what happens. 🙂

[…] Are the SEO Oneboxes Returning to the Google SERPS? Nah…..except in Duluth, Mike Blumenthal […]

[…] Are the SEO Oneboxes Returning to the Google SERPS? Nah…..except in Duluth – Mike Blumenthal […]

They aren’t. This listing was a Dr whose last name is SEO

I am not even surprised!

What are the chances there would be a Dr SEO? That had me laughing for quite a while.

It’s a shame though that he’s caught up in the ongoing war of search engine optimizers.

Dr. SEO would always be at the top. 😛

Thats google localisation going too far. I feel sorry for the Dr who has the last name “sex”, google has issues with that!!