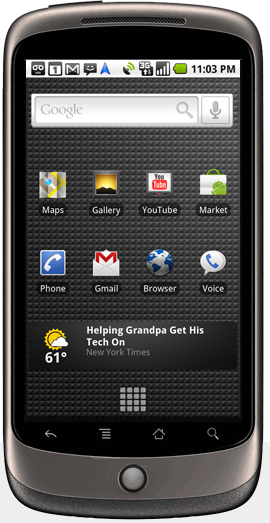 A common strategy amongst successful corporations is to “externalize” costs. By that I mean that companies will, when able, off load costs to maximize profits. This can be done for example by pushing environmental costs to offshore producers or using subcontractors to avoid labor regulations.

Google for example, often has forum participants provide support to other users in an effort to keep their support costs as low as possible. For many, many of the support areas of Google this has worked quite well. It has caused problems in the Maps area, where businesses expect, require and demand personal attention and apparently it has caused problems with Nexus support.

I guess, if you drop $600 on a phone, there is a reasonable expectation that there might be someone at the other end of the transaction to provide support. I don’t know what Google is doing to improve internal, company provided support but they have come up with a way of actively encouraging folks to help out with support in the forum area.

Google has offered a free Nexus to the their top forum contributors (of which I am one) in the markets where the Nexus is currently being sold. I, and a number of other top contributors, received this email on Monday and within 72 hours had shiny new phones:

It is with great pleasure that I write to you today. As you may have seen in the clubhouse, many Top Contributors have asked about the possibility of getting a Nexus One phone.

We have been working to make this a reality for some of you as a thanks for all that you’ve done. I would like to offer Top Contributors located in the United States, United Kingdom, Singapore and Hong Kong the opportunity to get an unlocked Nexus One phone for free.

Please note, this offer is for an unlocked Nexus One phone. It does not include any type of service plan. Adding service to the phone will be your responsibility.

By giving you a phone for personal use, our hope is that you will be able to learn more about the Nexus One and Android operating system first hand and share your knowledge with others. If you meet the geographical criteria for receiving a Nexus One, but you don’t think you’ll be using it, we ask that you do not request a phone at this time. This will allow us to distribute more phones to a wider audience. We’re happy to send you another gift of appreciation instead.

If you would like to take advantage of this offer, please fill out my form located at: XXXX

I know many of you have recently submitted your mailing addresses, but for this promotion, I will be asking for it yet again, to ensure accuracy. Please note, you can add a different delivery address, but we ask that this address be consistent with your country of residence. Thanks for your cooperation.

Thanks in advance for your understanding.

Cheers,
Frankie
on behalf of everyone at Google

John Mu also pointed out in the forums that Google “wanted to say thanks for your work as a Top Contributor and provide feedback on what you like/dislike about the Nexus One”. He made it clear that there was no quid pro quo in the arrangement and that even links back to Google when writing about the program should be no-follow to avoid even the appearance of a conflict.

It is actually quite brilliant if you think about it. Bizarre as a support strategy but brilliant. I have no idea whether it will work to have volunteers as the first line of support in their competition with Apple and other cell phone manufacturers but if it does it will provide Google with significant savings.

Given that the phones are new, there can’t be a lot of expert users yet in the Nexus forums to provide this “support”. Those Top Contributors that received the phones feel both grateful and a certain sense of duty as a result of the gift. Even though they work for free, most are incredibly talented and persistent in their pursuit of answers on Google’s behalf. There is already a very active conversation amongst the recent recipients about features, functions and options. Google is not only getting market feedback from technically savvy folks with customer support experience, they are getting kudos and loyalty from them. Here is one poster’s comments:

My phone arrived today! Wow..Its wonderful..I have set it to the charging point now! Thanks a ton and ton and ton and lots of tons Google! (And Frankie, and all others who made this possible and yea, the Legal team too 🙂 )

I have no idea how many of these phones Google distributed in this way. Obviously, this is not the only market into which free phones were distributed as staff, a number of well know reporters and others also received them

But lets guess that 50 top forum contributors did receive them. Assuming a wholesale cost of $300 (here is a report on tear down costs) , Google will have incurred $15,000 for good will, market testing, some articles and a first line of support. That is significantly less than the cost of single staffer and the support includes enthusiasm to boot.

What will be interesting going forward, is whether Google can in fact provide support levels that retain customer loyalty while actively externalizing these costs. With my iPhone, I dial 611, select #4 and within a few seconds I am usually speaking to a native speaking support person. The two times that I called support, the experience was exemplary but could not have been cheap. Apple has to a large extent, redefined what support means in the technology industry with their desktop and phone support.

If Google can drive the bulk of their support through a no/low cost system, it will provide them with significant margin advantages. Externalized advantages for sure, but an advantage none the less. Ah, the wonders of capitalism.

I, for one, am not confident that it will work. If it does, I do not look forward to future where all support is done by volunteers in forums for if Google succeeds many major corporations in America will follow. Even the shadow of support that we now receive on many products will vanish.

For my part, I will report on using the Nexus for local and with Maps and support issues that I encounter. I, like Miriam, will be exploring it as a developing influence on the SMB market and will from time to time, chime in with my experience using the Nexus. Unlike Miriam, I didn’t have to buy mine (although I have the same expensive plan). If I stopped to figure out what it cost me in terms of time spent in the forums, I am not sure I wouldn’t ask for a refund.

Nice writing and explanations, Mike. I look forward to your commentary.

Thanks a lot for the reference/link to the article about Verizon. Fascinating. Entirely missed that article, though I don’t have the same opinions on its consequence as you imply.

It would be like a game show/reality show….with the winner getting incredibly valuable points used for/and by the potential buying public 😉

The quote that made me think of the similarities was this: “We don’t look any different than Google,” he said. “We can begin to look at eliminating central offices, call centers and garages.” That implies to me that is more than just the network that makes them look like Google but the changing support structure

Great idea for a reality show…

You should be the host.

Woo hoo! You got your phone. I’ve been eagerly awaiting this, Mike, and can’t wait until you start writing about it. I spent time last night exploring how to use the built-in Maps and was really starting to get the hang of it. Neat features I want to write about! Congratulations on getting your phone!
Miriam

Me, again, Mike.
My latest post challenges you to figure out how to leave a review via the Maps icon built into the phone:

I couldn’t find a way to do this. Can you?

Were you serious when you said “simultaneously while calling Google customer service” – no phone number for Google support exists!

That said, it’s an interesting approach by Google of “croudsourcing” the support for NexusOne. But it does not quite work if there are HW issues or order problems, which volunteers cannot solve.

Earl knows better than most that Google has no phone number….but he keeps dialing it anyways. His real hope (as I think he wants to change careers) is to become host of this new “reality” show. He will say that David Mihm is cuter than he, and perhaps a better choice for this spot but secretly we all know that he craves this high profile spotlight. 🙂

Google’s is taking a very fragmented approach to support…when you go the support page, they offer up HTC’s phone number for hardware problems…

Given the complexity of the device & Apple’s tremendous success, I really don’t think that Google thinks that this is the phone to dethrone the iPhone. But if they can be compared to the iPhone their chance of gaining market share by providing other carriers at least viable alternatives (this stealing Palm, Rim & Pre sales) it is a win for both the carrier and Google.

Interesting observation – a bit like IKEA getting us to do the assembly for them for free.
Just came across this UK mobile service provider, GiffGaff, which offers cheap “pay-as-you-go” rates for unlocked phones based on “people-power” encouraging users to do the support and marketing in return for the low-cost rates. http://giffgaff.com/index/summary

Its a bit like relying on an open source software community to run a business or for support, very risky at best

[…] Matt McGee’s Most Important Developments in Local Search for 2009Jimmy (4 comments) on Google: Recruiting Volunteers to Provide Nexus Support with Free PhonesNexus One: The Second Coming but Not An iPhone Killer – Part 1 | Understanding Google Maps […]

[…] The other benefit (?) is that I occasionally receive unsolicited gifts in the mail. Google sent me very cool Nexus Phone and a coffee mug. Once I even got a box of 40 count potatoes (the source of all potato jokes… […]