According to Google Guide Cecelia this “is the best way to report spam because it gives us the most information possible. Our team can see which specific listing has an issue, whereas the form only asks for a URL. Sometimes these URLs are broken or people forget to add them”. 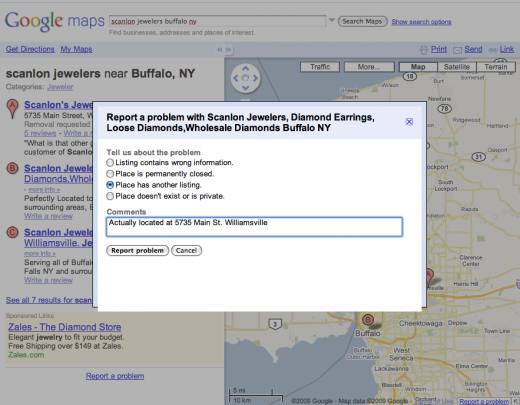 The feature is mostly available in all countries which have the community edit feature. Although not all countries so noted in the chart as having community edits have the report a problem feature. In Canada is available on main Map listing view near the bottom and is only available on those listings that have already been claimed. Additionally, in the US only, a user report can be filed against an already claimed listing.

Maps Guide Cecelia noted that the “time frame [for spam removal] most likely varies based on the number of reports we receive”. Spam removal has been a point of frustration for many SMBs as Google has been more likely to use the information for algo tweaks than to remove the offending spam. This is a practice that often leaves egregious spam in place for months on end with no indication when if ever action would be taken. 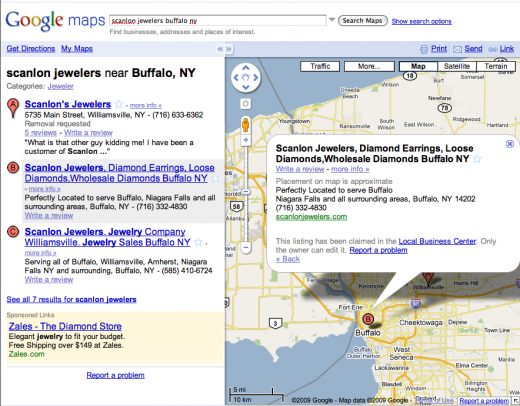 I’m glad you reported this for wider spread clarity. I too had seen the description Maps Guide Cecelia gave with regard to reporting a problem. The response was given to one commentator in Google Groups for Maps.

Is there a wider level response from Google? I would hope so. Otherwise that set of directions as given by Cecelia would be lost to the greater community of SMB’s and interested parties that see these problems/SPAM and try and get them rectified by contacting Google.

Frankly in its recent revision and structuring of google groups for Maps there are now over 1800 comments, questions and complaints from business owners. Its escalating rapidly. There needs to be a wider broader, clearer set of guidelines. Otherwise people don’t know what to do. And that doesn’t even hit the problem that so many have experienced: If the problem is reported…will Google ever get around to fixing or correcting it. You referenced that above.

Of course, fortunately there is this blog. It reaches a wide set of SMB’s, SEO’s, local SEO’s and people concerned about information in the Local Web world. Its fortunate you are publishing on these issues. In fact with regard to Cecelia’s comments in that Google groups question you had to correct Cecelia as to in which parts of the world the edit function is available. GOOD WORK. Help us. Add to clarity.

As to the Edit/function/Report a Problem option. My experience is slightly different than that which you report.

1. If an LBC record is unclaimed there is an edit link in the Local Business Record Bubble. Click on it and it does give you the “Report a Problem” option. Then a series of drop down menus/ questions and an opportunity to comment appears. Pretty straight forward.

2. My experience is …if the record is claimed and you click on that link…it is taking me to the Local Business Center Dashboard. When I’m signed into Google it takes me to the series of LBC records I’ve referenced. When I’m not signed in to Google, it takes me to an option to set up a Local Business Record. That is not the “Report a Problem” option.

3. As Cecelia referenced in that single response, once one has entered the local business record bubble, one can click on the map. That click will then generate a “report a problem option.”. That works whether the record is claimed or unclaimed.

Thanks for reporting on this. Unless I’ve missed it I hadn’t seen a widespread mention of this methodology. In fact as I first tried it…there was no intuitive way I ever would have recognized that clicking on the map in the local business record bubble would have turned up the “report a problem” option.

I hope Google speeds up actions on these reports. I operate SMB’s. Spamming the local business record can dramatically impact the fortunes of a small business. Google’s Maps inserts into organic search can at times have HUGE HUGE impact on the fortunes of businesses. Some businesses are significantly affected by this Google feature.

I would hope Google would step up to the plate and act more quickly and responsibly with regard to cleaning up the mess. It affects a lot of folks. As one commentator before me said: “With Great Power Comes Great Responsibility”.

Wow….thanks once again Mike for the Xmas present ! This is great news and I’ve got 2 clients who we’ll use this for too….just hoping the ‘response’ time for changes will not be lengthy tho!

From what I’ve seen so far, once a listing has been reported as “doesn’t exist” by one user it is not possible for other users to report it.

I would have thought that frequency of the reports would be a strong signal for Google about fake listings. I’m concerned that the current setup will put people maliciously marked as “doesn’t exist” on the same footing as clearly fake locations.

It’s a much, much improved process and far more useful than just marking a listing as showing an error.

The best feature is the ability to reported claimed phony local business listings, of which there are many, but I’m not certain if they should be reported as 1) Listing contains wrong information (there’s no real business there), 2) Place has another listing (since they’re usually claimed by serial spammers) or 3) Place doesn’t exist or is private. Guidance from the Google Maps team would be a help.

Mike, you’re so right about the frustrations of filing reports and seeing the spam remain for months and months on end. Fingers crossed this new report method will inspire quicker action.

I am on the road today so have just a few minutes to respons:

I wonder how it’ll be in the Locksmiths field- probably tons of “Report a Problem” form were sent against legit companies. Let’s ee how it goes!

Do you think this is a way for webmasters or small business owners to report their own problems with their listings or is do you see as being a way for spam to be reported.

BTW, this feature is not available to listings in Canada yet.

It is a way for any sort of problem that can’t be addressed in the LBC to be reported…I don’t know how Google will respond to them. Most likely only in bulk or on very eggregious abuses.

BTW it is available in Canada even though there is no community edit feature there. The link isn’t associated with the specific listing but with the view at the bottom on the left just above the YellowPages.ca™ link. It is structure slightly differently but has much of the same functionality.

In Canada, it only allows you to give input IF THE BUSINESS has been claimed. You can not add information to unclaimed businesses. So if you want to spam in Canada but not have it reported then feed it through YellowPages.ca

This is a wonderful development — thanks for reporting on it Mike. I’ve used the old report format several times to report SPAM and it was tedious. I’m glad Google is making the “self policing” part of their strategy easier for the “self police.”

Can’t seem to find this feature in the UK. I’ve been trying to claimback a couple of reviews erroneously attributed to a competitor. I keep on reporting this from the report spam on the review link, but get no response.

Mike: Unfortunately the spam remains. Reporting is made, and I don’t see actions. Spam can continue for months on end, impacting small businesses.

Why did Google bother establishing guidelines and creating mechanisms for reporting them when in fact they don’t act on them.

If you want to see this situation at an absurd level take a look at this search:
http://www.google.com/search?source=ig&hl=en&rlz=1G1GGLQ_ENUS349&q=madrid+bike+tours&aq=f&oq=&aqi=

Take a look at that record, then revert to this message in google groups for maps where you commented…and where Cecelia declared it a spam name: http://www.google.com/support/forum/p/maps/thread?tid=0e1de808d533cfd9&hl=en#all

We saw the question back on 12/14. Google Employee Cecelia deemed it spammy. Cecelia described reporting spam. Spam reporting was discussed in depth, by you and Cecelia.

Yet that very thread, shows spam, shows it not being changed, discusses spam reporting…..and irony of ironies. Google sees it and does nothing.

If that single thread is not an invitation to spam name records, I don’t know what is. How can Google not react to the spam reports? How can they seemingly encourage it, by in a very thread wherein they discuss Spam reporting and then let it sit undisturbed for 2 weeks.

I have one of those SMB’s you reference above that is losing business due to spam records. How many spam reports do I need to submit? 50, 100, 1,000. Will it matter?

Google is a big black hole in so far as customer service is concerned. In many cases its engineered algo’s encourage spam. They can recreate false data, but Google does nothing about them.

Its a shame Google shirks its responsibility. By virtue of its control of search it has a monopoly on a critical element of business. It is not responsible in dealing with the algorithmec errors it creates.

Soon questions of monopoly are going to rise about the merger of MSN and Yahoo. Google will be questioned on this issue. I can’t wait to show my evidence as to how powerful, monopolistic, and irresponsible Google is.

Step up, Google. Act on the Spam. Above all else, don’t set up a system that blatently encourages it….then sit back and study it without recognizing the consequences.

The feature is available in only some european countries and only on unclaimed listings. For example it is in Austria, France and Germany but not UK, Ireland or Spain.

Generally it is available where the chart indicates that community edits are available but not always.

The buzz about Google sending out Favorite Places packets with window decals to 100,000 of the “most…

I’ve complained in Double digits abt a couple of businesses with outrageous name spam. At its worst a spammy record in the LBC not only uses a town name, an erroneous word (that is better for search traffic). But it has STOLEN or at least copied the official and legal name of a business.

Lots of submissions. No actions by Google. What is an SMB to do?

Now if I were Holiday Inn…they would have fixed this already!!!

it seams this feature is not available in Italy

Yes it is not in all countries yet

[…] a Problem: With the exception of map based problem reports, Report a Problem, which came out in late 2009, always seemed like a deep, dark well for the burial of Places issues. I, a careful […]