There are faux pas and there are FAUX PAS. Google Maps by virtue of its global scope and the occasional tin ear of its algo has managed to periodically insert itself into the culture wars of 21st Century. Google Maps has been accused of Chinese bias by the Indians and Indian bias by the Chinese and of course the real battles of Jerusalem often take place in the virtual world of Maps. However, Google may be trying its luck by taking on the French in both matters of food and language.

Reader Keonda has pointed out on my post about Google Maps newly instituted sentiment analysis feature that Google is now showing the more granular review information in Europe. However, apparently it is showing up on the localized Google language sites in English.

The French take their country, language and food very seriously. By showing sentiment analysis on Google.fr of French food in English, Google may have just stepped into one very huge aggregation of merde. It would seem to me a sure fire way to anger everybody from Sarcozy to the subway conductor. And trust me, you don’t want to anger the subway conductors in France.

Note on this example search for the Lasserre Restuarant in Paris: 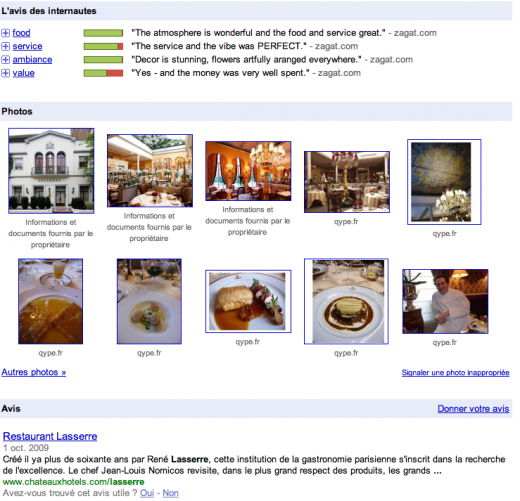 Sentiment analysis has to be a very complicated algo and it would seem to be very culturally and linguistically based. There are likely to be even regional differences in expression. For example I can’t imagine how the review for the Medical Marijuana Provider in LA would translate (Hey dude, that was some good shit!). Perhaps for now, Google has just figured it out in English.

If that is the case then perhaps it is premature to be showing it on the regional sites. Unless of course they are prepared to do battle with Le Monde and the powerful French unions.

Only if you are French 🙂

@Mike Sentiment analysis algorithm must be exceptionally complex, especially since every country has a slightly different way of doing things.

In this case someone probably just forgot that it was in English. I’ll tell you something, If I was using Google Maps in France and came across that I would be a-little mad, especially since it’s NOT IN MY LANGUAGE!

Will the French find this acceptable? What do they think?

@Mike, The setiment analysis algorithm is written in English most likely.

Thus when Google is crawling the reviews in a foreign country they probably translate it to English then apply the algorithm.

My gut shot feeling is they forgot to include a re-translate aspect of the algorithm to bring it back into french etc.

Writing the algorithm in 500 different languages would be foolish, use the tools at hand to decode them (Google Translate) then analyze the data then re translate it back to the local countries language.?

I am by no means a code monkey and am not the person to assess Google’s programming. That being said, it has not stopped me before. 🙂

My sense is that sentiment analysis would require too much precision that would likely be lost in translation.

1)There are not enough native language reviews to stoke the sentiment analysis engine.

2)It was rolled out in English initially and will be coming out on a language by language basis as they get to it.