Update 5:00 pm: The Google Lat Long Blog has officially announced the rollout of their improved sentiment reporting. They also noted that they have “improved [their] ability to find reviews of places, searching more quality sources of information from across the web”. I have heard reports recently of dramatic jumps in some Place’s review counts.

The ever astute & voluble Earlpearl, has pointed out that Google has added a new interface twist to the Places page where they now indicate that a record is Owner Verified and shows a checkmark if it has been claimed into the Local Business Center.

Improved Interface:
If the record is unclaimed there are now two choices; one to do a community edit and the other allowing the business owner to immediately claim the record into the Local Business Center. Previously the interface involved the circuitous route of selecting the edit link, then being taken to the Maps view info bubble and being required to again make the choice. While a minor interface upgrade, it will make it clear to both the editing public and the business owner what they need to do to correct a record while on the increasingly visible Places Pages. 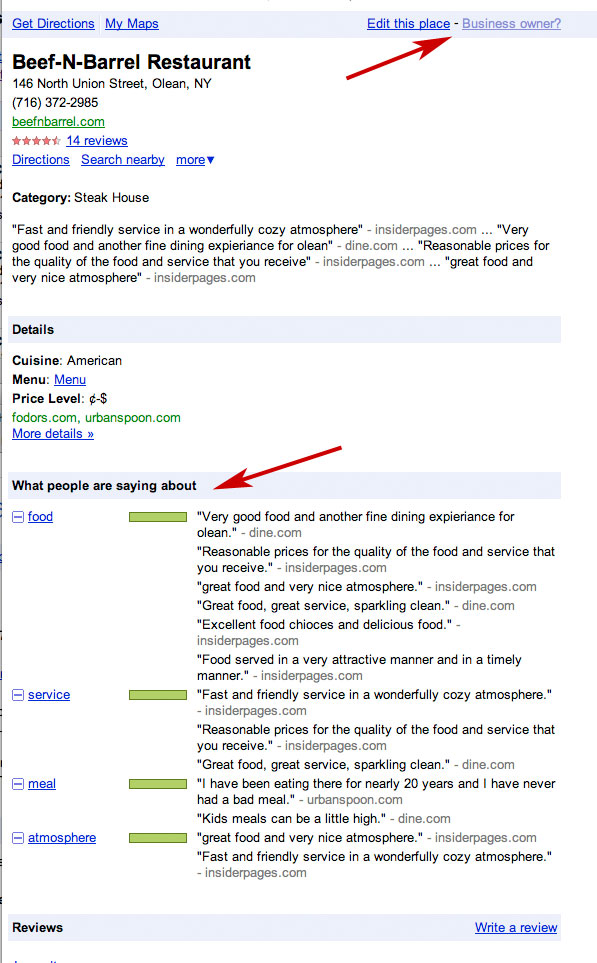 Additional Sentiment Analysis:
Note on the above example the additional sentiment categorization now showing when there is enough information for the algorythm to break out the details. In addition to the sentiment summary that has been visible at the top of the page, the sentiment is categorized, summarized and the user is given a choice to expand.

I am not sure when this feature was added but this is the first time I have noticed it. I have only examined several restaurant listings but the detail appears to be broken out on a content available basis. That being said, in the examples that I looked at, this detail showed only on listings with 13 or more reviews. I assume that it is possible for the sentiment detail to show up on restaurants with fewer reviews if the sentiment is consistent across some indeterminate number of reviews. Update: here is a restaurant with 11 reviews showing sentiment details: Old Library Olean.

Here are several more examples from the Buffalo area of the types of sentiments displayed:

In some cases the more granular sentiment detail showed above the photos while in others it showed further down the page below the photos.

While the detailed sentiment analysis is not appearing in every industry where there are enough reviews and sentiment summaries, I have spotted the more granular results amongst locksmiths, plastic surgeons and dentists.

The sentiment analysis and owner verified checkmarks are appearing in Spain, Canada and China so it apparently the new features have released worldwide.

In countries where community edits are not yet permitted there is only the “Business owner?” link at the top of the listing.

As David Mihm has pointed out, sentiment analysis now appears to be much more prominent in the display of a business’s information on the Places Page and has become a more important influence. It is also reasonable to assume that it is now playing a more important role in ranking.

I saw this appear for the first time last night, and I’ve been working on local campaigns every single day of of last week. In Canada, I’m still seeing the old review ‘stars’ system right now, but we have ported over to the owner verified checkmark.

Very interesting commentary about sentiment analysis. That is a “user friendly enhancement. Will these “evaluations” of the body of reviews have an influence on rankings? That would be interesting.

Assume the body of “analysis of reviews” ie sentiment analysis. Now assume an owner has an ability to filter reviews…ie the discussion of demandforce.com, which can be a review source for its users.

A) Demandforce is a mechanism to generate a lot of reviews
B) The owner has an ability to “filter out” ie eliminate bad reviews.

C) The business is left with lots of reviews…and an overwhelming volume of positive reviews because of the built in “filtering” process.

The evolution of this process will be interesting. It still leaves me uncomfortable w/ reviews weighing as a ranking factor. OTOH, evaluating reviews is a user enhancement.

Meanwhile, Mike, with Google’s little improvement/articulation of whether a business listing is claimed or not…..I would only hope they would spend some time better articulating with regard to problems within the LBC. Common English and simple directions would be a step up. OMG. it might be a first step to customer service!!! 😀

Suppose an owner has an ability to filter reviews as in the demandforce.com example discussed in a different thread.

If the owner filters out the bad reviews…

Thanks Mike (and Earlpearl) for pointing out these new changes. I went to check them out for myself and noticed something else that is new to me:

Did I miss the boat on this one? Sorry if this has already been covered.

I think this is a step in the right direction. I used to send links to videos to clients showing them how to claim their listing if it already appeared on the Map. It never made sense how many hoops you had to jump through just to get to the “claim this listing”!

On a similiar note, I just wrote about Google constantly changing the game on SMB http://www.localsearchpilot.com/local-search/how-can-a-small-business-keep-up-with-googles-changes

@ Jim Gianoglio
that will probably help ensure the Places dont show up organically. It appears every Place now has a CID (customer ID)

[…] Mike Blumenthal points out that these categories only display on listings with at least 11 reviews. It also appears that Google needs to recognize/classify at least 3 comments for a category to show up. […]

@ Mike
“additional sentiment categorization now showing when there is enough information for the algorythm to break out the details”
Looks like 3 is the minimum for Google to parse into a category. Hover over the latest of Google’s green bars to see.

@ Jim & @ Jason
I’m only seeing the cid on certain listings. Many Place Pages have the nice URL & it seems to be the same url structure for the handful I just checked.

Good catch on the 3 minimum.

Early on the URl’s had more latitude in them…

All places have both a CID and friendly url….not always obvious but there none the less

@EarlPearl
Google has recently (this past week) upgraded the Forums again to make them work better. They are trying and succeeding at some level of improvement.

[…] (especially with mobile) to find local business listings. A hat tip goes to Mike Blumenthal for pointing out the changes to Place […]

Hey, nice catch, Dave. Slowly, Google is making it clearer and clearer whether a business listing has been claimed or not. Pretty important!

Wouldn’t you agree that he is both astute and voluble?

The screen shot from the patent filing (Aspect-Based Sentiment Summarization – US 20090193328) showed reviews broken down by attribute as well, but the interface being used is much better looking than what the patent image showed.

Great additions. Not often that you see Google play catch up.

How ’bout that restaurant in NY. What kind of beef do they serve in a barrel? Those must be some big portions.

Wow, what great timing as @earlpearl was discussing reviews “rather long windedly” on his featured post! 😀

I see this being very interesting….Imagine a search like

Given that reviews would determine “value” or “food” Google could move to display results based on public opinion. Very cool and a major step towards 3.0-4.0 I think this secures that reviews will be a major factor in local for the long haul.

Also excited to see which listings are verified and not verified. Only issue is some local search monster company is now going to come up with some crazy cheap business model to verify the unverified.

[…] business and simple colour coded rank bars. They have also added a new icon to clearly show if the location has been verified by the owner. The interesting test showed that even in large locations like NYC many chain restaurants such […]

Yes they a nice job with the layout. It is interesting how dynamic of a result that it produces. I wonder why sometimes it is located higher up the page and other times lower.

While the Beef is not in Barrels (the draft brew is), the Beef is available in very large quantities throughout the restaurant. They have 3 beef cutting stations where a large standing rib roast sits that they cut huge piles of thin slices from to order for their signature “dish”: Roast Beef on Kummelwick…. it is a German originated sandwich from Buffalo … fresh baked hard roll, covered with salt and caraway seeds, dipped au juice and stacked high with fresh cut beef cooked to order….a veritable but delicious heart attack to order.

I think you are correct and that this is the beginning of improved “sentiment” search.

I do think however that Google has been using some sort of sentiment analysis in search results for a while as explempified by this search: dirty restaurant LA CA.

In additional to helping the consumers choose a business, we find that it also helps a business determine and improve problem areas which better serves the consumer. What becomes interesting are tracking historical trends to see these improvements. I would hope that the Google analytics incorporates these trends as well.

A correction about demandforce.com. Business owners are allowed to dispute reviews under the same guidelines as Google’s review policy (profanity, personal details, etc) but there is no filtering mechanism that eliminates bad reviews. The reason Demandforce has so many reviews is they are submitted from actual consumer visits.

It’s interesting to note that the sentiment analysis is only displayed in english today in non english-speaking countries.

Check these Paris and Barcelona restaurants (I’ve accessed both listings in their original language). Information is aggregated from english sources: zagat, tripadvisor, trustedplaces… Google might still have dificulties in replicating the sentiment analysis from other languages.

What’s more, the upgrade resulted in a new bug. ‘details’ section (informations détaillées) for the Paris restaurant are now in english whereas they’re still in spanish for the Barcelona listing (detalles).

I think its good to have a owner verified ad. It helps add credibility to the business.

Seems like Google is a Yellowpages as well now. I think Yelp will be going down!

[…] 28, 2010 · 0 comments Last year Google introduced Places Pages, which is an expanded profile for your small business in the Google Maps search […]

Yelp won’t go anywhere for a while. You’re right that Google pretty much offers everything but Yelp more specialized.