Google Maps Update: See your Listing in Maps (Or not) & What to do about it.

Lisa Barone in reporting that Google Maps now provides a direct link To “Find Yourself” noted that it is not exactly clear what is going on with the missing listings. In the past many reported cases in the forums of missing listings were in fact due to falling rank or a business not knowing how to locate their listing.

I think have identified a cause of some verifiably missing listings that seems to occur rarely. It appears that if Google is completely unable to geocode the address of the business, the listing has no place to appear on the Map and will not be shown. In some situations when this happens, Google will show the business listing as a circle but in other instances like the one below, the listing will disappear completely even when the link in the LBC is followed.

Here is the screen shot from the LBC and the view upon clicking the link to find the listing in Maps: 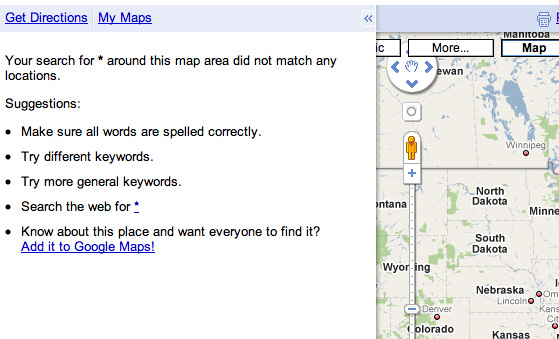 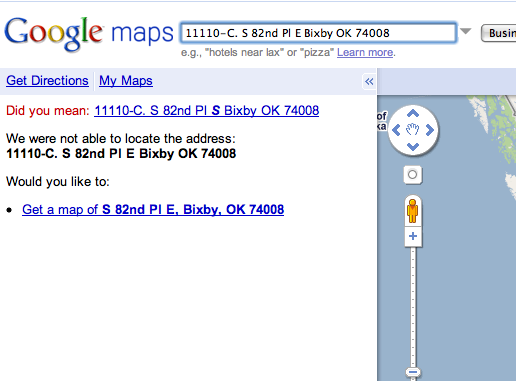 This is most likely due to the recent change away from using TeleAtlas mapping data. It is possible that it was also occurring using the old geodata but relatively unsophisticated users were unable to document it properly in the forums.

The recent change in base geodata has led to two situations that can lead to a listing dropping off the map. One is the rare, situation mentioned above where a listing completely disappears.

Another, which appears to be more common, is where Google is now geocoding the location incorrectly, placing it on the wrong side of town, even if it was correctly geocoded prior to the change.

See this example of a business located in the same office building as mine (this also happened to my listing). There are now two listings, one being approximately one mile north of the actual listing, despite both having the same address.

This can result in bad driving directions for your customers. It can also result in a duplicate of your record showing up in Maps (“under clustering”) thus diluting your record’s strength and rank. For this client it meant that on one of their key searches, their local listing did not show.

This makes it imperative that even businesses that have previously claimed their listings in Maps, go back into the LBC & Maps and double check their record.

Here are some things to look for/at:

1)Using the Map in the LBC, be that your record is located where it is supposed to be. Relocate within the LBC map as necessary.
2)Use the link to “See the listing in Google Maps” and make sure that the listing is properly geo coded AND showing up in Maps with a Pin.
3)If there is an error in the geocoding, report this to Google via the Report an Error feature. Google is stating that they will repair these problems in less than 30 days.
4)And finally do a search on your “business name + locale” in Maps to be sure that any geocoding errors have not created duplicate listings. If they have, claim and merge the second listing.

In the new era of algo generated listings, there are number of factors that can lead to a listing loosing its standing. The time of giving your listing to the YP saleman are gone and any business show now check on their listings in both the LBC, Maps and elsewhere on the internet on a regular basis. I would recommend once per month for most businesses and as often as weekly or daily if your Maps listing constitutes your lifeline.

Mike,
Thanks for the heads up, and great post. I have a question regarding the merging of 2 listings. I had a listing that was showing the correct address, and this particular listing had roughly 6 customer reviews. a Few weeks ago I noticed a duplicate listing. I claimed it, and verified it with a PIN. Now Google is showing the correct address, but all 6 reviews have disappeared. I have 2 listings in my LBC, the old one and the new one I just claimed, both with the correct address info. Will Google eventually merge these together and start showing my customer reviews again?

If the basic listing info (NAP+ url + 1 category) on the two is exactly the same then eventually they will merge. You can tell if they are merged when the impressions etc are exactly the same. When that happens the reviews should show back up in the merged listing.

mike does creating a user map of all locations I have for a client…help in score of relevancy I have seen these become all of the rage as far as the bigger companies go..your thoughts

My thoughts are that they might play a role in ranking but I have no proof.

They certainly can, if done properly (see Chris Silver Smith’s recent article at SearchEngineland) provide long tail traffic in their own right regardless of their benefit to ranking.

I find them also useful as an add on to client’s websites.

So given that, I usually create them for clients and figure I have nothing to loose as they are quick and easy to make.

Mike,
I have a listing (in canada) that is showing up without a pin point . Where is this ‘report and error’ feature you mentioned in step 3. I couldn’t find it in the LBC, the google help forum, or in our online listing. I would be delighted if you could point me in the right direction.

[…] October 30th I reported, using the new Google Maps Report a Problem link, a geocoding error that placed the office building in which I was located some 3000 feet north of its actual location. […]

Can the “report a problem” link also be used to report problems with the name listing or just the features of the map itself?

A local computer repairman hijacked our Google Maps listing and put his website on it under our name. I threatened to sue him and he removed it but in doing so he put the name of the company all wrong.

(I still don’t know how he was able to do this. The listing is supposed to be claimed and he is still able to fool with it.)

Not to even mention that before we were always on the opening page of results and now we are not.

I have put this on Google Maps Forum twice with no results. Can the “report a problem” link be used to bring this to Google’s attention or does anyone have any suggestions as to how I can correct this?

The report a problem link is just for geocoding and map errors.

Usually records of this sort are merged not hijacked but anything is possible.

How can this problem be reported to Google?

If it is a hijacking then through the forums, if it is a merging then you need to increase the prominence of your listing so that Google can distinguish from the listing with which it is merging.

Thanks for your help! But can you explain the exact difference between merging and hijacking?

We hired this guy one time and were not all that satisfied with him, but he put our name on his web site as one of his so called “clients”. Not long after that his web site appeared under our listing on Google maps.

Our listing was all completely the same as before EXCEPT THE GREEN LINE at the bottom which was the computer business’ URL.

We have been trying to get it changed and so far no luck. What does this sound like to you? Any suggestions? Thanks.

Merging is an outcome of Google’s clustering algo when they think that two businesses are the same so they merge the information into one shared record. Search my blog on “merge” and you can read about it.

Hijacking is the complete takeover of a record by malicious means by another business. Search on “hijack” to find out more.

It is nigh on impossible to diagnose let alone fix this sort of problem within the constraints of this blog. Thus I can’t really say.