Google is rolling out LBC Dashboard across Europe

Martijn Beijk (Local Search Optimization) and Arjan Snaterse (Technical SEO Blog) have informed me that Google, starting late yesterday, has been rolling out the Local Business Center data rich Dashboard across Europe. Martijn noted on Twitter that he had seen “listings in Netherlands and Spain and they were active 4 both of these countries. Usually this means a big rollout.” 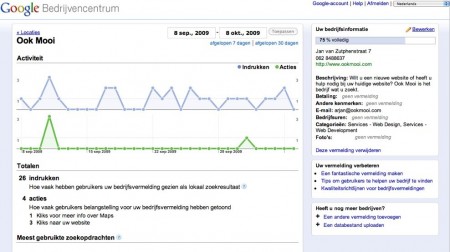 The data rich dashboard for the LBC was rolled out in June of this year in the US. Since that time stats have been missing outside the US since that time. Can Canada be far behind?

Great to see this. One thing I missed however was the traffic directions report?

[…] Google is rolling out LBC Dashboard across Europe, Mike Blumenthal […]

LBC Dashboard is visible in India too (Finally !!)

That’s great, now if we could only get Jim Rudnick his stats in Canada, all would be well with the world.

LBC Dashboard is visible in Italy too (Finally !!)

One screenshot from Italy
http://www.giorgiotave.it/forum/google-maps/123989-nuovo-local-business-center.html

Yes I can confirm that in the UK as well – it would be great if the stats were available for longer than a month.

I’m telling you someone in Mountainview clearly has a bone to pick with the great white north.

It does seem to be everywhere but Canada doesn’t it. I would not think it a plot on the part of Google unless it shows up in Peru or Ecuador before you guys get it. 🙂

It is not everywhere yet.. we are still missing out in Denmark unfortunately.

Thanks for the update. Do you know about the other scandanavian countries?

Not to my knowledge – we haven’t seen it here yet.

It appears that you are in the same category (or lack there of) as Canada. The odd men out as it were.

Well, given a choice, I would rather have single payer, national health care than the data rich Dashboard. 🙂

Just remind them that I am paying upwards of 20% of my income annually for the privilege of not going bankrupt due to emergency medical bills, that should quiet them for a while :).

When I add up the life time costs of the little stuff (healthcare, college education, retirement) your taxes don’t look so high after all. 🙂

Google Maps: Six reasons why your listing might “go South” & some tips to cope | Understanding Google Maps & Local Search
October 14, 2009 at 11:50 am

[…] has been a time of great change in Google Maps with new technology and processes rolling out at a torrid pace. Part of that change has apparently resulted in some shakeups in the […]

[…] Today it seems that it has finally made it to Canada as well. Canada may very well be the last major industrialized nation to have gotten the dashboard although we have yet to hear from […]