Last week (July 4-10th) postings in the Maps Help Forums took a leap, hitting record highs for both single day totals and weekly totals. On Tuesday, July 7th, total postings in the three main forums for reporting problems totaled 173 postings versus the previous single day high of 112 postings. The weekly postings for the forums which had been running around 500 total postings per week jumped to 772 even though they included the very low volume 4th of July holiday.

This chart undercounts total postings to some extent as it doesn’t reflect new postings in on-going threads. 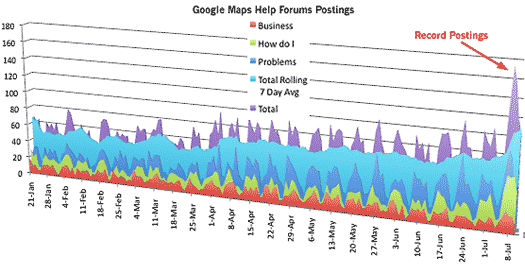 Last week , Google commented in their Google Maps Water Cooler Blog about their support intentions in Maps.  They noted:

We recognize how important it is for business owners to be able to list their business accurately on Google Maps, and how frustrating it can be when this is harder than it should be.

Since we can’t respond to every problem individually, we put a lot of effort into helping users help themselves, and each other. When creating help resources for the Local Business Center — the User Guide, the Help Center, the Help Forum, and the Water Cooler blog — we do our best to give business owners access to the information that will help fix their problems.

Anil Dash has pointed out that perhaps Chrome reflects Google’s Microsoft Moment. He said: “Google has made commendable steps towards communicating with those outside of its sphere of influence in the tech world. But the messages will be incomplete or insufficient as long as Google doesn’t truly internalize and accept that its public perception is about to change radically. The era of Google as a trusted, “non-evil” startup whose actions are automatically assumed to be benevolent is over”.

The rising tide of unsupported problems in the Maps world reflects a similar problem for Google. Only time will tell if Google’s hands off approach to supporting the SMB in Maps will succeed but the rising tide of reports to the forums seem to indicate that it might be a failing project.

That quote from Anil certainly does sum up what is happening, and coming, for Google and the public’s perceptions of the company.

The interesting thing to take out of that graph is where the sudden jump is coming from. The “business” section is still within its normal range while the big growth comes from the “how do I” and “problems” sections. Very telling.

I am away from my desk at the moment but because of the relatively low numbers of postings in the business forum vs the other two it might just be a visual artifact. My sense is that over the course of the they were up quite a bit as well.

I have broken out and categorized a day’s worth of postings which i hope to share tomorrow which gives additional insight as to where the current issues are.

Like both of you, I’m very curious about the ‘why’ for this jump. I wonder if some new bug has just emerged. Haven’t visited the help forums myself yet this week and I’ll really be looking forward to your follow-up post, Mike.

Here’s my Google anecdote for the week. My mother called me to tell me she’d seen something on the news that appeared to be Google meeting with U.S. heads of security. She said she looked at all these government people sitting in a room with a big Google logo on the wall and she felt really uneasy. She asked me if it’s possible that the government doesn’t realize that Google is a corporation – not some non-profit org. for the public good. I’m not sure what the meeting was, but she said watching this news piece gave her a what’s-wrong-with-this-picture feeling.

All I can say is that Google has the data and the technology that has caused everyone, including the government, to have to play in their ball field. Strange times.

I did check. There was a jump in the Business forum as well. The daily running average had been 10-11 and it jumped to 15. It is just less noticeable in the graph and not quite as large of a jump as the others

The comments are NOT the comments of happy campers pleased with Google Maps as expressed in the commentary by a Google commentator on July 7th of this year on this post in the Water Cooler..http://maps-forum-announcements.blogspot.com/2009/07/weve-heard-many-stories-and-talked.html

The commentary I’ve seen is of course are the opposite. More complaints, more frustration.

I’m just looking at that graph and what I see in orange, the business section, is an up and down between 10 and 20. So 15 may be a 50% increase over the daily average but visually looks to be inside the typical range as a few other orange peaks reach or nearly reach that level within the past few months.

“How do i” on the other hand looks to be well over a 100% increase this past week and “problems” look to be on the rise for the past number of weeks. It looks like the “problems” posts are what brought the rolling 7 day average up after April and the latest rise in past 3 weeks is a combination of “problems” and “how do i”.

I look at charts of data over time like that with the eyes of a technical stock market trader. You see areas of support and resistance which are critical zones that represent certain limits. Then when a limit gets crossed and we break into a new zone it seeks out it’s next critical level, until something happens to make it break an old support level or find a new resistance level, where resistance keeps it from going higher (a ceiling) and support keeps it from falling lower (a floor). You see this all the time at certain price points in the stock markets, at all time frames, where support and resistance represent critical sociological/psychological levels on perceived value and areas most people tend to place buy and sell orders. Often at, or very near, common even numbers like $50.00 instead of $48.92 or $51.23 or with major indexes like the Dow at 8300 or S&P 500 at 900.

I might be heavily digressing on the discussion here, but in my thinking something began to happen in April bringing that rolling 7 day average up to about 60, where it stayed (resistance) until mid-June. Then it reached critical mass to break through resistance and now is on a run as it explores its new boundaries.

In the stock markets it’s the “herd effect” or “mob mentality” of millions of people making buying and selling decisions, largely based on current price and recent price changes up or down, provoking fear or greed. Here with Google Maps it could be the spreading of the word to more and more business owners about Google maps and as word of problems with listings and word that some businesses are getting lots of customers out of Maps, or loosing them when their listing disappears, we get similar fear/greed bi-polar emotional effects driving more people into the help forums.

Wow, how’s that for a comment on a local search blog? 🙂

What is the source of problems in the Google Maps Help Forums? » Understanding Google Maps & Local Search
July 14, 2009 at 1:49 pm

Clearly it could be both exongenous and internal changes that affect the total. It could even be seasonal travel that drives up complaints about bad underlying Maps data.

Maybe today’s post will provide some additional insight for you to look at.

That would make total sense then, the rolling average bumping up and hanging steady in the 60 to 70 per day range after April. What was the trigger then in mid-June for the bigger run now occurring? There has been a lot of blog posts in the SEO space over past few weeks, that might be pushing it. These kinds of things can have their own positive feedback loops, like how things spread viraly on the net. Google makes a change (merging issues in April), lots of people find problems with it and complain. More notice the complaints and then see the problem. More people talk about it, blog about it, and more become aware and it snowballs from there.

[…] Maps has never been very good about feedback. If a business had a problem in the past, posting in the forums was always a crap shoot as to whether they would get an answer and even determining if a listing […]

[…] the forums were a place for problems to go die a slow agonizing death… where problems would be written about but never solved. I would […]