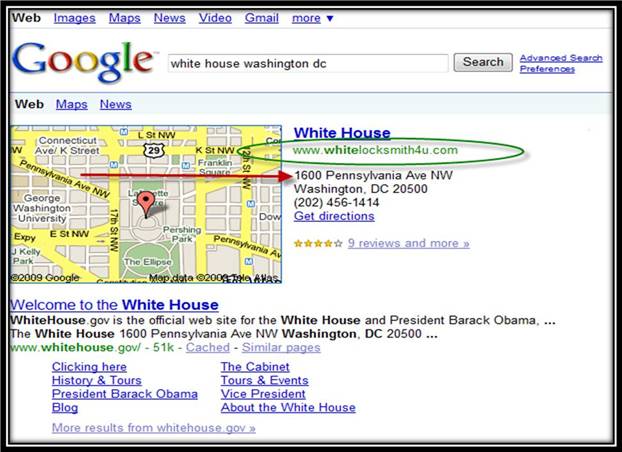 In related news, O’Reilly fan PanzerMike, has reported the Obama Whitehouse for Mapspamming for multiple listings at one address and keyword stuffing to achieve higher ranking in Maps. According to PanzerMike: “Its not fair that first every lawyer in LA but me can Map spam and now Democrats can too!” 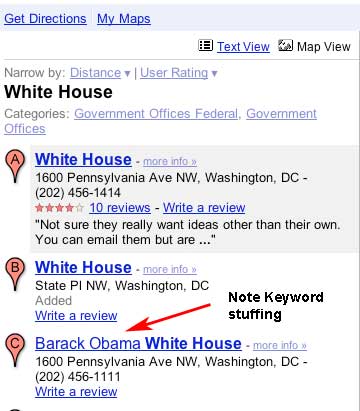 Change (your Google Maps Listing), Yes we can!

Apparently they have no problem staffing for creating an April Fool’s Joke but lack on working with improving the Google maps system… sad…. not that I don’t enjoy the annual fun though.

Yes someone did spend some fair bit of time on the Introducing CADIE websites. Man, I wish I could get that front and center spot on Google search for my humor!

Strange but true…..I was searching for computer services in Olean, NY…..and called the phone number that showed up in a one-box for some firm called Blumenthals.

How do ya like it. A locksmith who is somehow affiliated with a wierd IYP answered the phone. Now every month I get billed by my local phone provider for $60/month…..$20/month for rekeying my locks/$10/month for hosting my site/$10/month for some kind of worthless ads running in an IYP in Zanzibar…..and the rest in taxes.

BTW: when I complain about the above chicanery…..they connect me with Google’s customer service number 1-800 NOT HERE

As they say its the journey that’s so important not the destination. sounds like yours was adventurous!

“I wish I could get that front and center spot on Google search for my humor!”

Mike, I think you’ve already made enough waves at Google with your humor recently. 🙂

Ah yes, must have slipped my mind, Google doesn’t always “get” my humor. Forgot about that. I guess I am off the list for the front page. Dang

@David
Thanks for the affirmation.

I sometimes wonder about my sense of humor and whether it is too “subtle”. Apparently Barry Schwartz did not notice the date as he placed this report into the SearchCap: The Day In Search, April 1, 2009 Local Section rather than in the April Fool’s section.

I already wondered why there was no response on twitter ;-))

I read that one can create an identical listing to the one of my business with a different telephone number, and once activated, can change everything else. I believe this is what happened to us:
– what can I do to very quickly fix this to the correct details?
– also, can I stop them from doing it again?
Thanks

In theory, this is no longer possible. Google apparently put in place safeguards around the middle, later part of February to prevent this in the future. There is little that you can do to quickly correct this other than contact Google. Hopefully once it is fixed it will not happen again.

[…] humorous was the frequency of hijacked business listings which even reached as high as the LBC entry for the White House. Google seems to have largely taken care of this issue system-wide as […]