On May 7th of this year, Michael Ehline aka PanzerMike, an LA personal inury lawyer, was banned from Google Maps for spamming. It was the first known Google Maps banishment for Maspam and at the time there were neither listing guidelines nor a reinclusion procedure.

PanzerMike has now informed me, via email, that he has once again been allowed back into the index. It has been over 7 months since he was banned.

Thank you for your note. After reviewing your history, we’ve reactivated your Local Business Center account. Please note that you may need to re-add your listings at this time. We appreciate your patience and your taking the time to comply with our guidelines in the future.

Find answers, ask questions, and share your expertise with others in the
Google Maps Help Group at http://groups.google.com/group/Google-Maps

Listing guidelines  and a reinclusion request were announced in September. 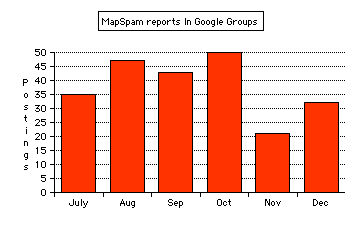 It is not clear whether the quality of Maps’ business listing data has improved over the past 7 months. Since the thread to report Mapspam began, postings have averaged 38 per month in the group with a high in October of 50. There were only 21 in November and December has postings 32 month to date.

As David Mihm noted in his SearchEngineland review of the postings, not all of these reports are specific instances of Mapspam but the numbers might give a rough idea of the trend. I too am surprised at the relatively low & declining number of reports and wonder whether Google’s action have led to an improvement or it is just the relative obscurity of the reporting mechanism. Whether the lower number of reports in November and December actually reflect a long term trend in Mapspam reports is yet to be seen.

Do you think that PanzerMike’s banishment was appropriate? Have the Google’s listing and banishment policies improved the Maps index? Have their policies had an impact on the volume of Mapspam?

I do think PanzerMike’s banishment was appropriate, but he has clearly gone out of his way to try to reinclude himself. I am all for giving second chances; I imagine Google’s tolerance for violations will be pretty low this time around.

Well, even Google seems to have the Christmas spirit. Tis the time of year for pardons.

He sure was the poster boy for banishment. 🙂 Google couldn’t have hired someone better to let people know that the they could get banned if they misbehaved.

You should extend your analysis to October, November & December though. My sense is that the reports of real spam are coming in at about the same number of actual cases as the quality of reporting has gone up…but I could be wrong.

Yes we have to admire PanzerMike’s persistence in this matter! And I do believe that it was necessary to have re inclusion procedures, as David said, everyone deserves a second chance.

One man’s persistence is another’s stalking. 🙂

Perhaps I will update on my blog in January (I am “off” SEL in January because of the holiday week).

PanzerMike has been long-suffering in this issue. I wish him luck with his second chance. The LBC listing is something to be used and guarded with care.

“I imagine Google’s tolerance for violations will be pretty low this time around.”

That is certainly true, but I think it’s also true for any people/businesses that we consider to be abusing or spamming the Maps/Local products.

Hi. First, I want to thank Blumenthal for having this excellent forum and also for refusing to show favoritism towards any party in the dispute.

I agree ultimately, it was my responsibility to monitor my listings and I should never have given my (former) marketing guy access to my local account.

Third, I feel the seven month ban was unfair, especially considering the fact that attorney spam for LA is more sophisticated and rampant than before they even had listing guidelines. I note that despite several spam reports, none of that spam is being dealt with that is so clearly open and obvious.

Fourth, I stayed after the task, and ultimately, as a result of my whining, Google finally created rules for listings (still pretty vague) and rules for re inclusion into Maps.

Fifth, I understand it is still a new technology and I support quality listing guidelines.

Sixth, I still think there is an arbitrary and capricious business listing and removal policy for businesses and hope Carter and the team see that as well.

Seven, Google has no greater supporter than me and my family. If it was not for Google and Matt Cutts, I would be shining shoes somewhere.

I accept I was made a sacrificial lamb and hope next time . . . well I hope there is no next time. I had to lay off two people, it crushed my internet based business, and during a recession, and after a new born son, it almost shut me down.

My natural language based business suffered greatly as a result of adwords, spam type sites taking over with that great Map next to them at the very top. Oi vey.

Google Maps is great if you never had natural language results. The problem is that people who never invested the time to create a trusted site like me, skipped right to the very top, and as far as I am concerned were unjustly enriched by creating crummy sites that manipulate the Maps algo. (LaLaw24, Accidentattorneyzipcode, etc.)

Last, I am still totally confused. I have several locations in Los Angeles County, but it appears Google will only allow me to list one.

So this means I am not allowed to engage in truth in advertising, because if I list my Marina del Rey and Santa Monica locations, I risk being removed for Mapspamming.

I note my site is still not re-listed, but Diane Westgate has promised at the first of the year, Maps Jen will get me back in the results since Google is on a code lock-down right now.

In all events, God bless and Merry Christmas/New Year! Thanks Carter, Jen and Westgate. Most of all. thanks Google, for helping me create a better life for my family and helping me create jobs in this rough economy. Semper Fi.