Where Will Android Go Next? – Om Malik, GigaOm

When it comes to its new mobile operating system, Android, Google’s dreams go beyond just mobile phones. Indeed, the company is hoping that the open-source version of the software will eventually find its way into a panoply of devices. 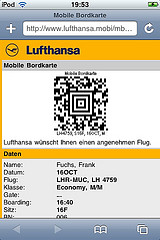 Frank covers his first experience with using his portable mobile device for e-ticketing. It works and and the counter attendant was able to scan the ticket directly from his iPod screen.

The new G1 from T-Mobile brings the promise of truly open mobile computing with full browsing capability to the cell phone. The logic of a cell phone purchase, however, is made more difficult by the awkward dance between the hardware, software & provider. It is never an easy decision and Pogue’s review of the new T-Mobile Android based G phone points out why.

The Android software looks, feels and works a lot like the iPhone’s. Not as consistent or as attractive, but smartly designed and, for version 1.0, surprisingly complete. In any case, it’s polished enough to give Windows Mobile an inferiority complex the size of Australia; let’s hope Microsoft has a good therapist.

Through a custom integration agreement, infoUSA customers can link business listings with contextually relevant neighborhood information from Urban Mapping’s database of more than 60,000 U.S. neighborhoods in more than 2,700 cities and towns.

Take a look at what Google’s Jonathan Rosenberg thinks the future of Mapping looks like.

From the Q3 Earnings Call: One other thing I would actually suggest you try one of the coolest maps applications I saw. Go to swisstrains.ch to see the precision of Swiss trains in real-time and you will actually get a visceral sense of what it is going to be like for people when all of this stuff works on their browsers and works in mobile devices.

Indeed, notwithstanding the built-in social networking elements, price may be a more effective differentiator for the Motorola Android phone. If there is price competition among the various Android vendors, how might that affect BlackBerry and the iPhone? Both have some insulation against price competition: BlackBerry owns the enterprise market today and the iPhone the high-end consumer market. Yet both could be forced to respond if multiple Android handsets are priced closer to $100 than $200.

And the more prices come down for smartphones, the more that segment of the market will grow. Three of the top five selling phones in the US are smartphones (two BlackBerry phones and the iPhone). That in turn benefits the mobile Internet as we’ve repeatedly seen:

Nice links. I especially like the one about the iTouch flight ticket, guess that’s another feature that will make me love my iPhone even more 🙂