Throughout May and early June there were reports of high volume bulk upload Mapspam for Earthlink, BigLocal and Computer Assistant. These listings were national in scope and often noted that the listing was Not a physical Location. Google apparently pulled down the publicly reported Mapspam.

A reader though, has pointed out that similar Mapspam is in the wild and in very large numbers in the Credit Card Processing world and TV Satellite (note the 20,446 hits on the query) installs: 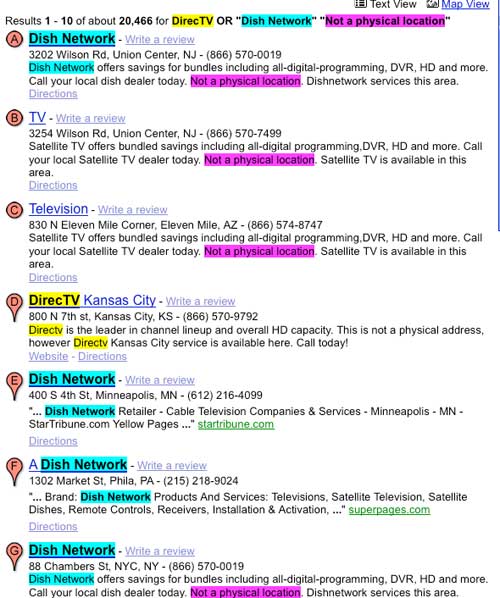 Here is a screen shot from the Credit Card Processing industry: 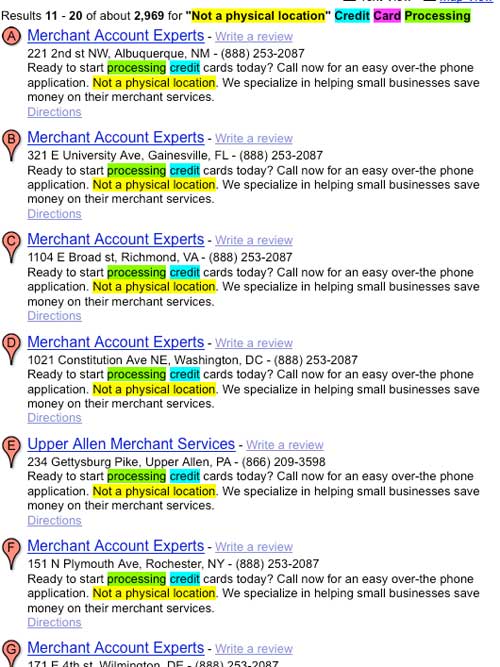 It is of interest to me that Google, while willing to go in and apparently hand remove these abusive listings do not take the time to find similar listings, obviously posted in much the same way and perhaps by the same people. Go figure.

Thanks for your help with this problem. I am a big fan of your blog.

This is interesting – if these were a bulk upload a physical address doesn’t need to be given, just a city & zip. Or at least up until a few months ago.

I have National Client that has on the road repair folks and we have to advertise in Google for them & as a rule we would enter in text on the first line of the address to discribe the service & then just the city they work in & a zip to match. Presto alaKazam they would be accepted.
That was the pilot test. I’m hoping that all this map spamming by these unscrupulous companies has actually damaged the ability for legit companies.

Again – thanks for the great updates… perhaps another muffin is in order.

Are you saying that these National Road Repair folks did local listings or advertised?

And did you mean “has” or “hasn’t in the sentence: “Iâ€™m hoping that all this map spamming by these unscrupulous companies has actually damaged the ability for legit companies.”