Recent reports of bulk upload Earthlink MapSpam may in fact be “spam” coming to Google from one of its “trusted” primary data suppliers instead rather than being entered via the Local Business Center.Â 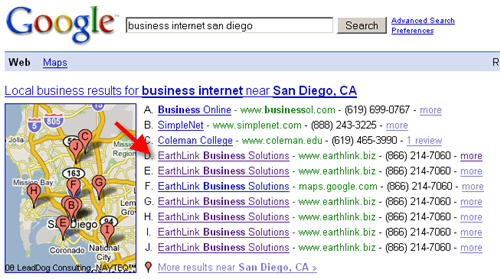 Last week and again today Imnotadoctor.com is reporting spammy listings in the Google Maps Local 10-Pack. In this most recent case the bad listings are from Earthlink. Stephen at Imnotadoctor.com speculates that this is a case of bulk upload abuse. (image courtesy of ImNotaDoctor.com)

However upon further inspection of theÂ records for both the Big Local and Earthlink spam, it appears that anotherÂ scenario could be that the listings did not come via Google’s Bulk uploadÂ feature. A more likely explanation is that they were fed to Google viaÂ a primary data provider.

A normal record in Google has visible attributes that are typically associated withÂ either a bulk upload or a single LBC entry. It is noted in the record that theÂ information is provided by the business owner and the record does not support endÂ user edits. In both of these cases neither condition was met. This leads me to supspect another route other than a bulk upload. 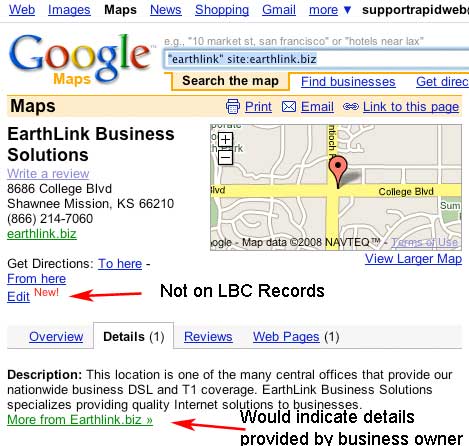 The questions might really be “which Google Data Provider has this levelÂ of trust and the inability to properly scrub their records?”

Mike,
You are right on target. My research concludes the same. If they have have the “More from blah.com” that is a for sure sign they just scraped that the data.

I have seen this happening when they scrape our local listings, the listing then has provided by business owner and the “more from blah.com”

It is not clear to me that they scraped the data. The reason I don’t think it was scraped was, at least in the case of Big Local, there was no such data on their website.

Do you think it was scraped from some other provider like SuperPages? I couldn’t find it there either. That is why I suspect some sort of feed.

Only Google’s programmer knows for sure. Would love to be a fly on the wall.

All I know is when we send in our feed it says provided by business owner. That may be different from source to source, you could reason that when they scrape or take feeds from companies like mine or superpages that technically it is provided by the business owner because they provided it to us and we sent it to google. I am visiting Google next week and will bring this up.

That is interesting. Could you send me a sample Privately?) of a record that you submitted?

Hmm, I really hope Steve will come back and let us know if his meeting with Google yields any answers. That is really frustrating 10-pack. Hardly the most relevant results one is hoping for. Good spot, Mike.
Miriam

[…] May 6th Imnotadoctor.com noted that Earthlink had made quite a mapspam splash. InÂ Google Maps: More Bulk Upload Mapspam or bad data from a Trusted Source. I questioned the source of the many listings, theorizing that it came not from a bulk upload but […]