Google Coupons are one of the great underpromoted features of Google Maps. It came, we saw and it didn’t conquer. Not because it couldn’t but it just seems to be one of those Google technologies that is languishing in the backwaters of some engineer’s 20% project.A recent query at the Google Maps for Business Group about why ValPak’s coupons were larger than his coupons got me to poking around coupons once again.What I found was a (buried) upgraded local like interface that allows a users to search for all coupons in a given area or all coupons in a certain industry in an area. For example you may search on “all coupons in Olean NY” or “restaurant coupons in Buffalo NY.Why coupons continue to be the poor step child in Google’s local arsenal is beyond me. Google could easily provide an interface to allow websites to embed these coupons either via an api, rss feed or an iframe (like Maps). This would at least offer the coupons some visibility and a way out of the dark basement of Google Maps.In September the InsideGoogle Blog noted a slew of new Google Coupon domains including Google-Coupons.com and CouponGoogle.com are now registered and controlled by Google. Perhaps this new (maybe its not new but it is obviously hard to find) interface upgrade and the new domains portend the first step in rolling out a more prominent coupon program. 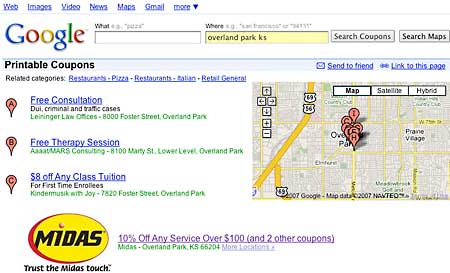 […] Check it out! While looking through the blogosphere we stumbled on an interesting post today.Here’s a quick excerpt […]

[…] My friend Eric just sent me an IM to warn me that Google has now launched their coupon search functionality in Google Maps (via Mike Blumenthal’s blog). Some examples: […]

I think that Google Maps should add a text link by “Find Businesses” that says “Find Coupons” so in general people would be more aware. I only noticed there even were coupons in Google Maps when researching hotels the other day.

Google’s lack of promotion has always been a mystery. It seems like it would be a popular feature (if it were findable) and that there are numerous ways that it could become more visibile.

Your ideas are good ones, as would a link off the the main search menu. Another simple way to make them more visible would be to show a link them in the Local Onebox results, so when you saw the top 3 local business listings there would be a chance of a coupon showin up.

An increase in visibility would also increase availability of coupons.

Perhaps this upgrade and the recent spate of google-coupon domain names indicates that they are planning on making it more visible.

[…] Looking for a deal?Â  Google it!Â  The search giant (and up-and-coming global empire) has quietly introduced the ability to search for printable coupons in Google Maps.Â  As local search blogger Mike Blumenthal notes, apart from some coupon-related domain names spotted last month, Google’s work on the service has largely stayed below the radar. Nonetheless, its coupon search can be easily conjured up to find deals at Boston restaurants, specials at San Francisco dry cleaners, and yes, coupons for Honolulu businesses as well. […]

[…] I noticed last month that Google registered a bunch of “Google-Coupons.com”-style domains, and it looks like that was a real sign of things to come. I usually post about domain name registrations at InsideMicrosoft, so it’d be worth checking out those posts in detail in case some clue is waiting in there. (via Blumenthals > Praized) […]

Understanding Google Maps & Yahoo Local Search » How many Google Coupons are there?
November 3, 2007 at 2:41 pm

[…] The new ability to search Google Coupons offers an intriguing glimpse through the window into the world of Google’s coupon efforts. Coupons have the potential to both drive local usage and further monetize local business data for Google. With internet search, Coupons could provide a new interface/access point for visitation and searching of local business data. It is easy to imagine a link at the top of the main Google search page or a link for coupons in the Local OneBox results that bargain hunters used regularly. With any number of web 2.0 technologies, Google could spread coupons across the internet as well. In fact the ready availability of coupons on Google might broaden the use of coupons in general. […]

I think that Google Maps should add a text link by â€œFind Businessesâ€ that says â€œFind Couponsâ€ so in general people would be more aware.

Yes that would make sense. Coupons have been virtually invisible since their inception. I think though that is due to the lack of inventory that currently exists.

Once their inventory is broader and deeper I think you will see higher visibility.

I don’t understand how to get my coupon to show up on my business listing. Has anyone successfully done this?

Yes, it is done all of the time. In the LBC you need to create a coupon and then associate with a specific business listing.

Hi Thanks, I did that. I created the coupon. My coupon is active and created and it’s in my LBC, connected to my business. But when I search for my business on Google maps, the coupon is not on my listing. It only has a tab for Details and Reviews. There is no coupon tab.

What is your business name and location?

How long ago did you create the listing? It appears VERY new. Did you add the coupon simultaneously with creation or afterwards?

When you claimed the listing did it have the round pin?

Have you looked at the Business Listing Guidelines? Your listings may be in violation of them.

I didn’t even know that this existed. Thanks for the info. I checked it out and I agree this is a hidden part of google that could be a great resource for shoppers.

Google Coupons near you : Local Search Optimization – Martijn Beijk
September 2, 2009 at 9:45 am

[…] me this appears to be new but Mike Blumenthal already reported a Coupon search interface back in 2007. The search for coupons appears to have its own top URL now on the Google domain (although it is […]