Here are two screen shots comparing the Local OneBox before and after the recent upgrade (first noted by Matt McGee). Something that had escaped my attention was that while the width is the same, to accommodate the additional pins, Google has truncated some of the business names. Note the difference between “The Beefeaters Restaurant” examples. 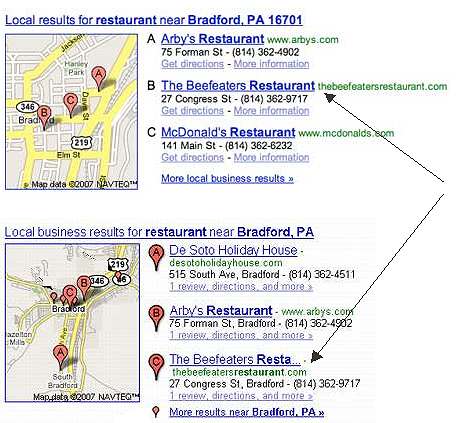 I have written previously on the importance of your business title in local ranking relevance and the NaturalSearchBlog has referred to the practice of adding search phrases to your business name as “extreme local search optimization”.

This change by Google doesn’t affect the number of characters allowed in the field but only displays as many as seem to fit in the given amount of space. Thus it doesn’t affect the relevancy provided by the title. It appears to be a calculation based on the combined length of your business title and url.

While it doesn’t seem to have an implication on your ranking, or on the title’s appearance once inside of Maps, it does impact the appearance of our business name if it is longer than the 20 or so allotted characters and if you are fortunate enough to be in the Local OneBox.

Below is what happened in search today, as reported on Search Engine Land and from other places across the web:…