Goog-411 rolls out bill boards in the hinterlands?

I drive 8 miles to work along NYS Route 16, down the hill known as Rock City, and past some incrediblly picturesque scenes as I head to my office in downtown Olean. The drive is rural and while Olean is called a city, it is a small (and getting smaller) rustbelt town of 15,000. It is 70 miles south of Buffalo, NY, 150 miles east of Cleveland and 150 miles north of Pittsburgh…it really is miles from nowhere (see this map), a market that most everyone forgets.

Everyone but Google it seems. Google has recently started placing billboards on our “main” north south road in their campaign for Goog-411, their free voice activated directory assistance service. Google has placed the billboard just south of town right after you pass the cemetery and just before you get to the breakfast hangout, The Robbin’s Nest. The road is not heavily traveled with a traffic count of perhaps 10,000 vehicles a day. 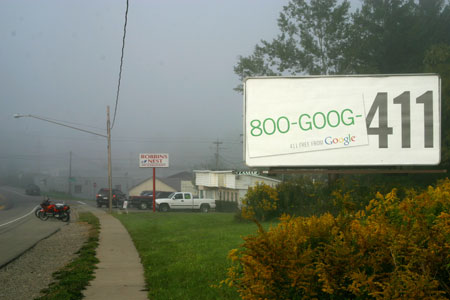 I recognize that they are in a pitched battle with the network operators, they were partially boxed out by the telcos on the spectrum auction, they are having trouble penetrating the walled garden of the cell world…but there is more than a little irony in a billboard campaign in Olean, no? That being said, it makes sense.

[…] Looks like Google bought a billboard to advertise GOOG-411, its directory assistance phone service. The billboard was spotted by Mike Blumenthal around Olean, NY. Google has traditionally not advertised for its products, preferring them to spread by word of mouth (and giant amounts of Google AdSense ads), but they were bound to start buying ads eventually. […]

[…] We learned today that Google 411 is being featured on billboards, perhaps in rural areas in particular. I used Goog 411 twice this weekend, the first time was successful, the second time not so much. I called looking for the closest branch of a national store, the number I was given brought me to a home answering machine; the address Google gave us wrong. fBatting .500 is grand in baseball, but not in directory assistance- -I would have been better off paying my $1.50 to get an accurate result from 411. […]

[…] It appears Google has started placing billboard ads to promote its mobile search product.Â  This one was found near Olean, NY. Full story here. […]

[…] venues very often. Apparently there are plans to advertise Chrome on TV and they ran their billboards for Goog-411 in out of the way places in September of 2007. WIn late April, Google introduced of profile […]

It is a sad day that’s for sure. Nothing does what it does.

[…] its seriptitious inception masquerading as a non-Google service called 520-find, to its bizarre rural advertising campaign, to the announcement last month of its ultimate demise. I have been writing about it and using it […]