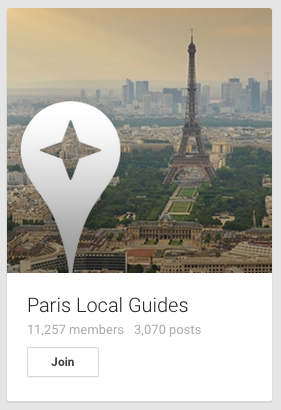 Many in the local search space have characterized the Google Local Guides program as a cheap imitation of Yelp’s Elite reviewer program. I suppose in some sense that is true but it appears to me that Google is bringing their own approach to the program and scaling it aggressively in a way that seems uniquely Google.

Google has done this before with their support forums and with MapMaker. They have managed to entice and incentivize large numbers of users world wide to engage in programs that help Google scale their products, gather data while simultaneously helping others in their respective communities. And doing so in a way that creates brand ambassadors that seem all to ready to drink the Google Kool-aid.

Having attended the recent TC forums in NYC I can attest to the fact that the many volunteers there were fanatical in their approach to all things Google. On the one hand I was embarrassed by the unthinking love of Google by many of the attendees while on the other I was in awe that Google had managed to capture such loyalty and to have embraced it at such large scale.

The Local Guides program replaced their City Experts program earlier this year and seems to be striving for that same sense of building out a scalable, love fest. City Experts was in my mind, much more like a combination of Yelp’s City Managers + Elites in that it required Google people on the ground to lead the effort in every city. By reaching out to users at all levels of review writing, Google can expand both the reach of the Local Guide program into many more markets and the depth of the program to reach many more users. And do so with very few staff people or perhaps the same number as in the City Experts program.

Has it been successful in its short life? It would appear from the G+ communities that it has. There are nearly 3000 members of the private Local Guides Community on G+. This community is limited to reviewers that have signed up for the program and review more than 50 locations. I have no clue how many Yelp Elites there are but 3000 active reviewers, many who have written more than 250 reviews can become a powerful force.

But the other communities appear to be active and vibrant as well.

Just in these four communities, Google has attracted 29,000 folks that are interested in those cities and in writing and reading reviews about them. I assume some of this success is from the transfer of users from active City Guide programs in those cities. The other cities on the list have not been as successful at scaling but the program has been in place less than two months.

If Google can incentivize the reviewer who leaves 1 review to leave 5, the ones who leave 5 to leave 50 and more importantly the ones that leave 50 to leave 250 then there will be both a quantitative and qualitative impact on Google’s review corpus as well as the general perception of Google as a good place to leave reviews. And that desire seems to be present in the posts that I have read in the private Local Guide forum. Comments like “I just got my #LocalGuideBadge! Way cool!” are not uncommon and the members all take their charge of helping others very seriously: “If anyone is ever in #leeds #uk please give me a shout for recommendations where to eat!” . Its hard to put a value on that to Google in general and their efforts to get more reviews in particular.

Here is a copy of the recent Local Guides newsletter: 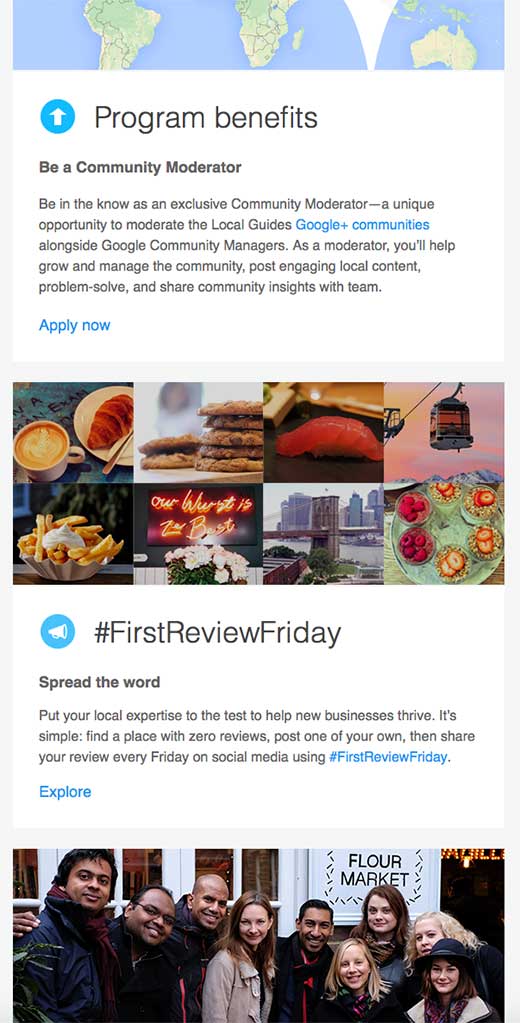 Mike: I’m of the opinion that the Google program is a copy of the Yelp program, (cheap or not). I suspect its a copy in that the yelp program seems to be working.

There is no outside source that quantifies reviews on sites. Yelp reports total reviews in its quarterly financial reports. Google doesn’t. Whether Yelps totals are accurate or not, nobody knows.

But google and yelp probably both know. I’d bet they are monitoring totals for each other, scraping volumes of reviews totaling them, analyzing acceleration of review totals, etc.

After all businesses can and do analyze the volume of links that sites acquire. One could similarly analyze the acceleration of review totals.

Copying the success (I bet its a success..but I don’t know) the practices of one company is a standard process in business. Its not necessarily cheap.

I’ve done my own observations. I believe yelp crushes google with regard to restaurant reviews. I tend to think restaurant reviews don’t need aggressive “management” as might other verticals. They appear to be the first choice of reviewers.

From my tests, Yelp accumulates in a range of about 4 to more than 10 times as many reviews for restaurants in “yelp” cities. In non yelp cities its roughly 2 to 1….and that total includes smaller metro areas with a central city of about 70-90,000 population. (the census bureau definition of a metro area reflects a region with a “central city” of 50,000 or more. Those are NOT big cities. My tests look at only yelp reviews that show versus filtered reviews. So the difference in volume could be significantly greater than what I’ve seen and measured. (btw: I’ve measured totals in 15 to 20 non yelp cities (some as small as 70,000 in population.)

I don’t study this hard. It might not be that different than your observations from the recent TC meeting.

At least that is my interpretation. It appears Google is attempting to do the same.

It seems to work. McDonalds did a great job of opening many stores with the exact same product. They ended up selling millions and billions of Big Macs. Burger King came along and has similarly sold millions or billions of Whoppers.

Big deal if one business copies another’s seeming success. Businesses have been doing it for decades and decades.

Mike: I took a quick count of G+ and yelp reviews in Arlington, VA. Arlington is a close in suburb of Washington DC. It is definitely a Yelp targeted city. Yelp’s review totals should be high.

I searched in Bing on Arlington VA restaurants and then went to google to compare G+ and yelp reviews. I took the number showing in the Google serps page. Then I went to each yelp page and totaled the current number of “filtered” or “not counted reviews”.

I got through the first 16 restaurants listed in Bing:

Then I searched on Yelp Community Manager Washington DC.

I think there might be more than one in DC as they might have different regions…but I’m not sure.

The one I found has been an elite yelper for 6 straight years, has a total of almost 800 reviews, 63 updates, 254 tips, has scheduled A LOT of yelp events, and had OVER 2400 Yelp friends.

Just a lot of raw numbers but the difference in volume is dramatic and significant. Having seen all that Google might have more reviews in the area for more diverse services in general. I just think restaurant reviews blow away everything else for pure volume. Additionally they create Visibility and Credibility for the various review sites, Google+, Yelp, or any others.

Frankly I’ve done the same type tests in a number of cities. As I referenced above I see similar results as this one for “Yelp targeted cities” and results that are closer to 2 to 1 for non yelp cities.

I’d replicate Yelp also. …..and as you noted above Google has an enormous reach. If it works they could close the review gap and pass Yelp. Time will tell.

Mike: I get your point now, the Google method is different than the Yelp method. Both attempt to spur many reviews and both work to develop a community.

Google and (I’ll call it) google world with its communities etc. is the spur in one case. As you referenced there are a lot of google fanatics. That could work.

In both cases though they start with “something” and try and build a following, which seems to depend on getting a fair quantity of volume reviewers. That volume, sparked by a smallish group of “true believers” seems to work to spur others to do so.

Now, here is something somewhat unique. I’ve continued to measure and count review totals for restaurants. I think restaurants are somewhat different from many other verticals, in that they don’t need to spur reviews….they get them in large quantities. They might benefit from review management if they aren’t operating well….but if that is the case they better fix things very very very fast, IMHO.

I looked at the first 10 restaurants from a bing search off of the carousel for restaurants Baltimore.

In any case, coincidentally the first 10 restaurants listed in bing also all used OpenTable. It included some chains and of course locals. But as OT users they are all more high end.

The aggregate totals of reviews for that group of 10 by review source:

But then the HUGE KNOCKOUT SURPRISE for total reviews–OPENTABLE:

OpenTable (OT) is very popular with customers, less so with businesses. It makes reservations for customers, and after x volume of reservations one gets OT money to use for a future reservation. Terrific incentive if one tends to dine out a lot.

Reviews aren’t required to get OT incentives. One thing that sticks out is that all OT reviews are anonymous, signed as an OPENTABLE diner.

I wonder if that promise of anonymity is a terrific spur to generate reviews???