Mining for Google Hummingbird Guano in So Cal 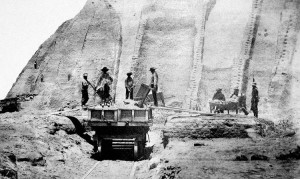 Google’s Hummingbird guano, like real guano, is fertile ground. Unfortunately, in the case of Google’s guano, it is fertile ground for spammers and spam and nothing as productive as farm crops.

Southern California has always been a hot bed of Google local spam particularly in the legal industry. Yesterday I was exploring search results for listings in the criminal defense and DUI area. For the 2 terms in 6 towns I found 3 spammy Hummingbird One Box results. That is a 25% #fail rate. Much higher than I had previously seen and an indicator that this problem deserves Google’s attention. I was going to add the adjective “immediate” to the word attention but since this problem has persisted for 4.5 months already and has been reported on a regular basis, immediate seems, when associated with the words “Google Hummingbird quality in local”, like an oxymoron.

Given the industry and the search phrases these are incredibly high value search phrases. The listings were total crap and yet Google continues to deliver these results which enrich spammers and deny others a place on the page.

I dutifully reported these to Google so your results may vary on the searches today. Taking these results down one by one though hardly seems a solution to a problem that exists at world wide scale.

Here are the searches that returned the Hummingbird guano: 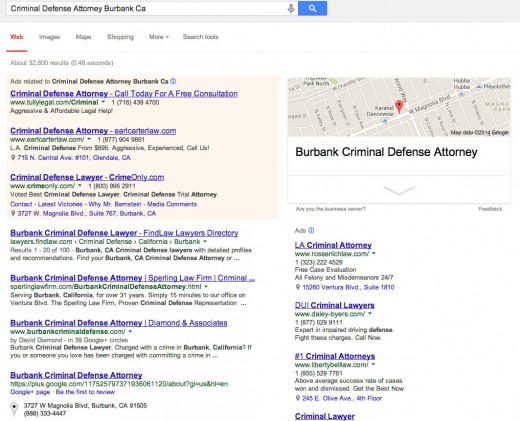 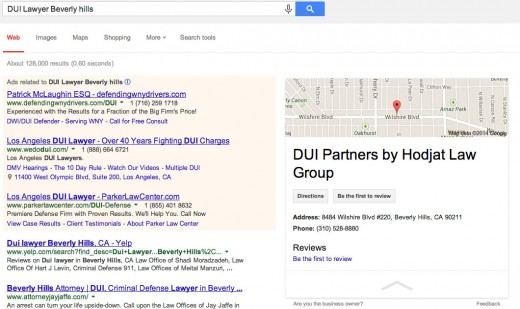 The legal hummingbird guano is overflowing landfills. It’s rampant in Chicago too: http://gyitsakalakis.com/wp-content/uploads/2013/10/personal-injury-lawyers-chicago-Google-Search.png

Fortunately, once reported, the Google Department of Streets and Sanitation seems to be acting promptly.

@Gyi
A great analogy. Although the image that comes to mind is that of the sweeper that followed behind the horses in the early 20th century… not anything so sophisticated as a motorized street cleaner.

This is such a huge problem. I stumble across these “one-packs” all the time. I think that 25% is probably about right, and I bet it’s increasing. I wouldn’t be surprised if there is some kind of spammy guide floating around out there that teaches people how to game this loophole. “DOMINATE local search with this one weird trick! Only $29!!”

I ran some queries on our rank tracker database a couple of months ago and found thousands of examples. It’s a good data set, but requires someone to manually filter through it to remove all the actual branded searches.

The way this “feature” is locking out the rest of the businesses is completely unacceptable. I suspect that there are people going out of business all over the world and spammers are raking it in. Google really needs to fix it, and fix it soon.

@Darren
I would love to see the data set that includes the branded bad boxes.

Since I started reporting on this in August at my forum, that thread has grown to 83 posts, many of the posts have multiple examples. The thread I addressed to Matt Cutts & JohnMu over at the Google Webmaster Forum is 33 posts long:
JohnMu & Matt Cutts Important Algo Problem – Gives Spammers a ONE-BOX, Locking SMBs out of Search

We’ve also started a list we are reporting directly to Google management.

In spite of all the ones we’ve seen and reported, as I keep telling Google, we only see the tip of the iceberg. I believe there are a thousands more.

Based on results from the MozCast Feature Graph one-boxes are on the rise over the past 30 days. So it’s not getting better, it’s getting worse.

Reminder, if you don’t see some examples, its does not always mean they are gone. You have to set location to the search area to see them. Unfortunately that means that’s what all the local consumers are seeing.

Google needs to be held accountable for this nasty turn of the algo and clean this guano up now.

Mike: At various times over a longish period different of our smb sites have had one boxes at times when they probably didn’t merit them. We have also been in markets wherein a competitor has had one boxes and we were shut out.

For those occasions in the past wherein we had a one box I don’t believe they were the result of spam..but rather that we were doing a heck of a job and the competition was weak.

I know you are aware of the long history of one-boxes and how they made smb’s nuts. They are normally not deserved….and really should typically only show for a branded name.

I think when a business uses a city name with its service, google should recognize the ambiguity of the search and for the sake of other businesses show the multitude of services and smbs and not just the lucky or sharp business that combined city name and service.

BUT HERE IS THE CRITICAL INFORMATION.

Our smb’s often ran comprehensive adwords in our regions for ALL relevant phrases. That gave us presumably ALL the searches for various phrases, including branded phrases and the infinite number of long tail phrases with some geo modifier and the service.

We used the impression data from adwords to define the Market demand in search for phrases. Google after all controls about 80% of search in the US. Of the particular smb’s we have some are way way too dependent on search.

Our numerator were all the clicks on the site including organic (organic and maps) and adwords.

For Branded search terms (our name) we would see somewhere around 80% or higher of all search impressions. (that is expected isn’t it). If one is searching for Blumenthals Olean one presumes they want to go to your site, not Joe Shmoes computer store down the street.

When we have had one boxes for discovery terms (like city/service) we have had roughly 65-75% of all impression traffic. THAT IS ENORMOUS.

Likewise when we were on the wrong side of a competitor having a one box it totally killed our traffic.

The inappropriate one boxes simply kill competitive business. It actually makes Google the decider of who gets business or who doesn’t. It makes them the czar of local commerce.

Years ago you led the effort inside the old forum to address this issue. Google in fact “dialed back” the one box messages. It worked in most cases. It helped a lot of smb’s. It made the search results more logical. It gave smb’s a fighting chance.

When we had organic results at a number #1 position, a #1 position in the pac and the same #1 in adwords we would have a dominant position…BUT we never got as high a percentage of all impressions as when we had the one-boxes.

Its a terrible terrible problem for all businesses and all local commerce. Frankly chambers of commerce, industry folks across the board, and all sorts of people concerned with commerce should be looking at this.

Inappropriate one-boxes can be a gift from the gods to one business and a death knell to all other competitors.

Google should fix this system wide and pronto.

Mike: I wanted to add something. For our sites that once had one boxes that were probably not merited beyond our working hard and weak competitors..we no longer have one boxes. Similarly in the cases where one boxes by competitors were once there….they are no longer there.

Similarly if one goes back years ago to the old forum and finds the thread and some of the smb types that complained about inappropriate one-boxes I find that some of those old smbs are no longer whipped by those one-boxes.

I’d suggest that the signals that are generating one-boxes today are different than what generated them in the past. I haven’t looked at them today…but dang they sure are working aren’t they if so many are showing….and I’m sure its killing the competition in a totally inappropriate manner.

I’m not going out purposely trying to find these. Every time I try to do other research I just run into them.

KW stuffed fake name violation. Plus it’s a claimed dupe, which is another violation. Here are both his listings, the other has his real name. http://goo.gl/maps/i9Vey

It is funny, I come across those all the time still and think the same what is going on with Google that haven’t taken them down yet? I’ve seen occasions where they are taken down, then disappear and come back again few weeks later and they are obviously fake listings. Then you check their website and it is obvious it is a website setup for renting or for someone to catch leads and sell them. Let’s hope Google gets their act together and start cleaning those up.