The review world is full of contradictions. 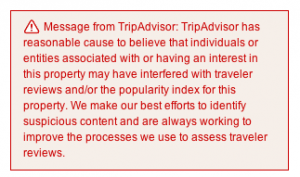 Many review sites, TripAdvisor included, have strong penalties if a business is caught incenting reviews. The prohibition makes sense in that an incentive is likely to lead a reviewer to generate a low quality, less than thoughtful review in order to receive the incentive.

There is also the question of whether the incentive was a “pay to play” arrangement that would create a conflict of interest between the reviewer and the business. Effectively the review would then be an advertisement rather than an objective review.

TripAdvisor is quite clear that there should be no incentives for a reviewer to review a business. Here is the TripAdvisor guideline:

I was offered an incentive for a review – is that ok?

No. Property owners are welcome to encourage their guests to submit user reviews upon their return home, but they are not allowed to offer incentives, discounts, upgrades, or special treatment on current or future stays in exchange for reviews. If someone has offered you an incentive for a review, please tell us about it.

If TripAdvisor suspects faked or incented reviews the penalties they will “red flag” the listing with a large notice. One blogger suggested, based on a search of Google’s index, that TA had flagged as many as 13,000 properties for having faked reviews. I think the real number is quite a bit lower as the Google search stops showing results after 263 results when you click through. Regardless, the flag is a significant penalty on the business and TA has handed out quite a few of them.

I am not a fan of incenting reviews as the potential for backlash and bad publicity far outweighs the upside. In a recent case in England, The Daily Mail had this headline: Tripadvisor bribes: Hotel owners offer free rooms in return for glowing reviews. Hardly a good situation for the hotel that was attempting to create a loyalty reward via the review process.

Clearly it is not OK for a business to incent a review. But is it OK for TripAdvisor to incent reviews? They seem to think so. I received this email from them a short while ago: 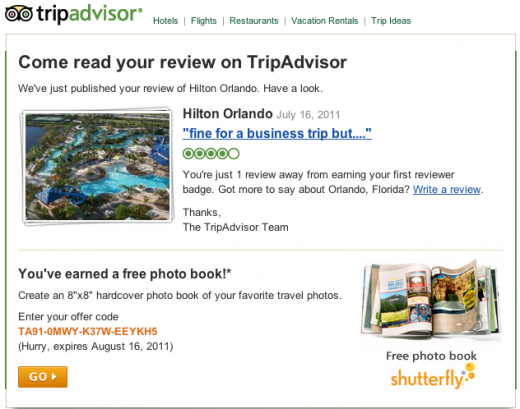 The practice is not uncommon for review sites to incent reviewers. Google was doing something similar in Portland and for which they were criticized. Their response was that there was no conflict of interest created when they were doing the incenting.

While it is true that there is less incentive for a reviewer to leave just a positive review. I would contend though that the practice, while not a direct conflict of interest, does probably lead to a lower quality of review, is hypocritical on the part of the review site owner and sends a very mixed message to the business owner, one that is often misinterpretted.

In the end, if quality of review is what consumers, sites and business owners are concerned with, then the practice of incenting reviews at both the level of the business owner and the review site should be stopped.

Review sites, like anything else that can provide one business with an edge over its competitors, will eventually become overwhelmed with spam the way every news-sharing and link-sharing site has become. The bottom line is that if there’s money involved, there will always be people and companies trying to gain the system, and history indicates that if the game goes on long enough, eventually they will win until the backlash is so severe that whatever benefit may have existed is rendered null and void.

On a side-note, the one major difference I see between review sites providing incentives for users to write reviews and the companies being reviewed doing likewise is that on in the latter is it implicit that the review should be generally positive.

Although it’s true that Google are incenting, they are now more often adding the rules of “quality reviews” over “quantity”, as I suppose they had numerous cases of abusive spammy multiple reviews, written specifically for their incenting games.

Mike,
I confess, I have been confused as to what IS allowed ever since Google updated their review guidelines last February (think it was Feb). I remember this discussion of the update at Matt’s blog and I didn’t feel like anyone actually understood what the revision meant:

Yelp does not like any solicitation. TA and Google do seem to accept solicitation as long as no direct incentives are involved in the solicitation of a review.

The question revolves around contest like situations where a company says… write a review and be eligible to win… that is not prohibited by either TA or Google.

Thanks for the insight, Mike. This is such an interesting topic right now.

I think it makes perfect sense for TripAdvisor to incent users to write reviews. Good, user-gen content is their bread and butter. They obviously should be completely neutral in their approach, but enticing more reviews seems to be a legit content strategy for them.

In terms of the business, I don’t know that I agree when you say that it’s clearly not OK for them to incent reviews. It’s a real challenge for businesses to get balanced reviews from customers. People are far more motivated when they’re upset or disappointed. To me, as long as there is no stipulation that the review has to be in any way positive, I don’t have an issue with businesses trying to get a more balanced review picture out there.

@Scott
I am not saying it is NOT OK for a business to incent reviews…. I am saying that the risks outweigh the rewards particularly with a direct incentive (see Hotel story above). A direct incentive is a precarious environment that could go terribly wrong… imagine a Yelper ripping into you for bribery…

A contest like environment (all reviewers that made reviews during the last quarter are eligible to win the lotto…. ) might make sense.

Regardless it is imperative that EVERY customer be included in the incentive … many SMBs are hesitant to do so and unless they include everybody they should NEVER consider it..

Hi Mike, does solicitation (Yelp) mean that businesses can’t have links to review sites on their website? Does this mean that Bright Local Review Biz tool is in violation of Yelp’s guidelines?

There is a way to let your customers know you’re on Yelp without being overly solicitous.

The power of word-of-mouth is that folks generally trust recommendations when they occur as part of an organic process. There is an important distinction between “Hey, write a review about me on Yelp,” [BAD] and “Hey, check us out on Yelp!” [GOOD]. It’s the difference between actively pursuing testimonials and simply creating awareness of your business through social media outlets.

The latter allows consumers to vet your online reputation without feeling like they’re being solicited. To an established Yelp community member, a reminder of your Yelp presence can act like a dog-whistle prompting them to share their feedback about your business with fellow Yelpers.

Here are three ways to remind customers on Yelp without being overly solicitous:

1. Stick a “Find us on Yelp” image on your website and/or print it out for your front counter or window. These have even been spotted on business-branded vehicles. All of these images are available via our Flickr (image sharing) page.*

2. Include a link to your Yelp business listing in your email signature with the words, “Check us out on Yelp!”

3. Embed a badge on your website. This handy widget can help you generate the necessary code to do this.

So it would seem that it should not be associated with a request for a review but phrased more generically.

@Mike. I see what you’re saying. That hotel obviously went too far, but I think their only real mistake was saying the review had to be positive. I like your scenario about a contest for people who leave reviews in a given quarter. However, I am still personally OK with a direct incentive if there is no stipulation on the nature of the review. If I have a hotel and I’m confident that by and large people are having good experiences, getting good value, etc., then I would be confident that more reviews would be a good thing. I wouldn’t see anything wrong with me saying that you get a voucher for a free breakfast or something like that if you leave a review of any kind. As a consumer of this kind of user generated content online, I am often frustrated by the pervasiveness of angry and/or nasty reviews. My assumption has always been that people are far more motivated to write a review when they’re angry (I’ve even done this myself). To me, getting a series of reviews from a more balanced cross section of the population would be a good thing. Just my two cents. Thanks for the discussion.

I agree with all that you say… with the exclusion of an incentive… I find that many, (enough) customers will leave a review without an incentive with just an ask…

Do you think TA gives this message for hotels that increase reviews dramatically similar to how Google flags too many links that happen too quickly? If a biz decides to follow all the TA suggestions offered in the Manage My Listing section, and all initiatives become live at once, will TA automatically flag the biz due to increased activity versus a perceived incentive? Which leads me to other questions? Is their a manual review process for this flag? Can a biz appeal the flag to be removed? or is it permanent?

@Lauren
I am not very knowledgeable about the nuances of the TA system… anyone?