Matt reached out to me last week with interesting data on the relative value of video snippets vs author photos in search results. This work compliments the research done on lawyer author photos and how consumers find a specialty lawyer last year. The research has implications for local as we have have seen pinned results in the wild that include them. Obviously the relative merits there have not yet been tested.

About the authors: This survey and corresponding write-up were
executed by SEO strategists Matt Green (@MChuckGreen) and John Van Bockern (@JohnEVanBockern) from Ethical SEO Consulting.

The Reeves Law Group has invested heavily in video creation for their website, and have seen a measurable rise in conversation rates as a result. Although the videos have a positive effect on users once they are on the site, the stakeholders at the firm were skeptical that the presence of video snippets in search results would in fact have a similarly positive impact on click though rates (so, actually getting the user onto the site). Accordingly, they commissioned our team to answer this question:

What is the true impact of video snippets on click through rates in searches for specialty lawyers?

Answering this question would allow the firm to make an informed decision on whether or not to implement structured mark-up on their site (which causes the video snippets to be displayed along-side their listings in search results) rather than simply assuming the snippets would have a positive effect, possibly to the determent of CTR’s. Our assumption was that they would increase click through rates, in a similar way that authorship images have.

To that end, we conducted a survey with the intention of discerning the sway that video snippets hold over users searching for local specialty lawyers. The results from the test that we conducted through Usability Hub, which provided an effective survey interface, rendered a glimpse into the impact of these snippets in the highly competitive specialty lawyer market.

We wanted to maintain the look and feel of a Google search result page as much as possible in the test, and then let the familiar process of searching guide the survey taker to make their own choice. This way, the design enabled us to keep as close as possible to the look of a search results page in order to most accurately represent click through rates. There were three separate images presented to a total of 300 respondents.

First, a survey taker was given a brief introduction to the test:

Next, the question appeared that prompted the survey taker to click. (The question remained the same for each of the three separate search results images that we provided):

You need to find a car accident lawyer in New York. You Google search “New York Car Accident Lawyer”. Which result do you click first?

Then, the top four results of a Google search page appeared. The first set of 100 respondents saw results that included no media snippet and looked like this: 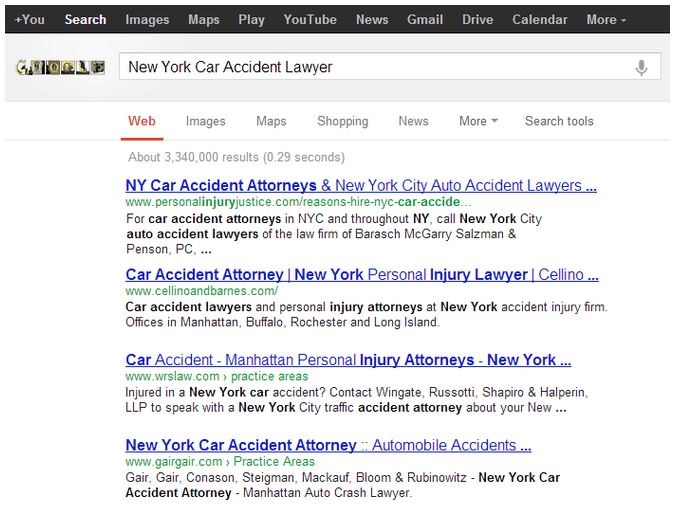 People who participated in this survey clicked on the image in the following way as indicated by the heat map below that recounts the concentrations of clicks:

As you can see, in this, our control test, the findings are as one would expect. The most likely result to be chosen: the first result. Proving again the efficacy of ranking at the top of search results.

The second set of 100 different respondents were given the same introduction to the click test, and also prompted by the same question, but the image they received contained an authorship snippet in the third search result:

The breakdown of the data shows the positive value of having an authorship image in search results of a specialty lawyer search:

Before we made any actionable conclusions, we collected the data from the third set of 100 respondents who participated after being introduced and prompted in the same manner as the two previous tests, but were then shown this image: 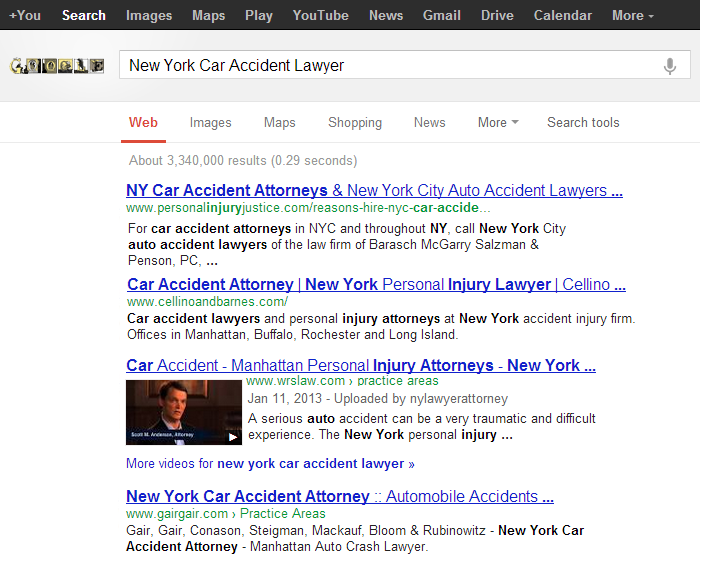 The respondents clicked on this image in a manner telling of the efficacy of placing a video in the snippet:

The data collected from the participation of this survey prompts some questions. Why was there the highest number of clicks on the fourth result of all three tests on the page with the video snippet? Why is there not a similar increased amount of clicks on the third result as seen with the authorship snippet?

What does it all mean!?

The benefit of authorship in lawyer specific search results cannot be denied. Whether you attribute its effectiveness to the eye-catching ability of the media rich snippet, or that someone searching for legal representation in this specific instance wants to know a little more about the face of that representation is irrelevant. Either possible cause resulted in differing click through percentages.

Media-rich snippets in results generally do have a positive effect on click through rates, but there is more benefit to using an authorship snippet rather than a video snippet in the personal injury lawyer vertical.

The results of this survey indicate that the presence of video snippets is much less effective in driving clicks in specialty lawyer searches than the simple authorship snippet. Why is this the case? Here is our take:

Searchers are getting more sophisticated. The internet is full of distractions, useless information, and time wasters, and they are developing an intuition for filtering through the noise. Now more true than ever, people are not going to click on a video result if they don’t believe it will provide them with the information they want, how they want it.

Providing relevancy has never been so valuable. People demand information as quickly as possible, and there is just not much more you are going convey in a picture of a personal injury lawyer, than you would in a video. The accolades that such a lawyer can boast are much more efficiently conveyed textually. People can skim text for their personally relevant keywords in less time than it would take to watch (and pay attention to!) a whole video made by a personal injury lawyer. Typical personality based catchy-phrase television commercials are useful for personal injury lawyers on that medium, but not online. Relevant, on-site ease of use aides retention, and that prowess has indicators in search results. People searching know that now. Position yourself accordingly.

What to take away:

Authorship snippets have a greater positive impact on CTR’s for specialty lawyer searches than video snippets.

Video snippets have a greater positive impact on CTR’s for specialty lawyer searches than having no media snippet, but less of a positive impact than authorship snippets

The Usability Hub interface, although very useful for this experiment, presents some limiting factors as well. The people taking these surveys are using this interface to conduct their own surveys. That means they may be more web savvy than the typical user, and that characteristic should be noted.

The survey also relies on the image of a search result , and is not an actual search result. Although, it may be as close as viably possible for data collection, it is not actually a search by a potential client.

Please consider leaving a comment as your input will help me (& everyone else) better understand and learn about local.
Video Snippets Vs. Author Images - Which Have Higher Click Through Rates? by Mike Blumenthal

40 thoughts on “Video Snippets Vs. Author Images – Which Have Higher Click Through Rates?”